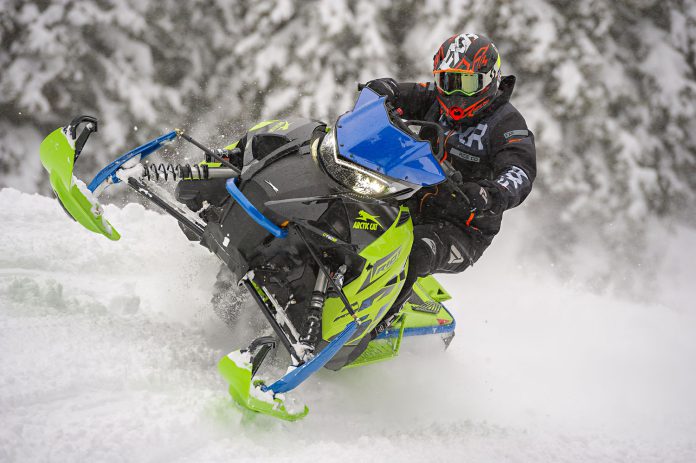 It’s no secret in the powersport media biz Arctic Cat has been taking it on the chin lately.

Multiple media entities in the powersports press – us included – have called out AC for stuff we don’t understand. Thankfully communication is flowing again from Arctic Cat and the news is good.

Let’s have another look at what Arctic Cat is doing in terms of product. First, the company unveiled one of the best new 50/50 X-over rides at last spring’s Snow Shoot event in West Yellowstone. The new Riot and Riot X got our crew of less-than-easy-to-convince Test Riders genuinely fired up.

The two versions of the Riot use a variety of Arctic Cat M-components – melding them together to form a potent, next-generation trail slaying / deep snow / boondocking ride. The two Riot models compliment the new Alpha single rail suspended M sleds (which appear to be replacing all previous non-Alpha models) with dual rail, deep snow skids.

The Riot is more trail targeted and the X more off trail targeted. The Riot twins are worthy competitors in the hotly contested crossover/boondocking category.

In the engine department, Arctic Cat has received repeated kudos from our team for the C-TEC 2 DSI (Dual Stage Injection) 600 and 800cc mills. These engines are among the cleanest running, most fuel efficient and powerful motors in the biz. We have continually knighted the 600 DSI as our fave 600 class mill as a result of its eager response and formidable top-end wail down Kevlar Lake.

The 2020 version of the 800 receives new cylinders for 2020, and new pistons with the slot removed. New cylinder castings place the fuel injectors (one per cylinder) inside the transfer ports, very similar to a semi-direct setup. Even though the market is obsessed with 850’s the updated 800 C-TEC2 is a strong player in the top performance segment. A hallmark of both the DSI 600 and last year’s 800 continues to be drop-dead reliability.

Big news comes in the form of the most significant improvement in Pro Cross handling since the platform’s intro. New spindles with new orientation in relation to the bulkhead provide the most turn-in and forward bite we’ve experienced on any Pro Cross model.

Gone is the chassis’ previous predisposition to shove its nose through the center of the turn and under steer past the apex. Turn-in is now strong, immediate and most importantly, reliably predictable through the entire corner. Part of the re-jiggering of the chassis includes moving the front arm’s mounting point lower in the tunnel.

There’s a reason why Arctic Cat has stuff the faithful will appreciate for 2020. People. Many of the same people who have innovated, developed and raced Arctic Cat snowmobiles for years are still doing just that.

Of note is Engineering lead Brian Dick. Aside from being one of the nicest, most approachable guys in the industry, Brian leads a team which has their fingerprints all over Arctic Cat’s 2020 product.

Clearly there’s a renewed spirit of team work in TRF and it goes from the top of the Engineering department to a Crew of committed, hardcore snowmobile enthusiast’s who just happen to be engineers.

Moving forward – not backward – there’s strong rumors Arctic Cat has some impressive new stuff close to introduction – including what’s rumored to be game changing technology in a new target market. Sounds good and you can be sure we’ll be there to learn all about it when it’s ready to release.