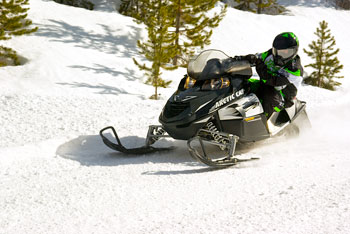 Okay, remember those ads Arctic Cat used to run with the guy riding some NASA water slide device that produced unbelievable G-force? It showed a close-up of his face distorted like a chimp. Well, that’s what it feels like dipping into the throttle on the Turbo Z-1.

There’s no turbo lag at all (thank goodness) and when the track gets some bite, it just launches you like an F-16 with the afterburner kicked in. Fun? Wow!

Unbelievably, you can trail ride all this power and the sled doesn’t get funky, either.

I wouldn’t recommend putting your 12-year-old sister on it, but you can actually get it down the trail in a sensible manner – if you don’t pin the throttle.

When you do, there’s an honest 175 stallions stampeding over that track and it is very attention grabbing. Make sure your pacemaker is fully charged.

It generates so much thrust we’ve had trouble keeping those air scoops attached to the side of the hood. They suck so hard and catch so much air they keep flying off. We suggest duct tape or crazy glue.

Our press sled is a Sno-Pro with upgraded shocks (Fox airs up front) but we still prefer the standard version’s more compliant ride (similar to the non-turboed Z1).

As it is, this sled is not overly stiff and is very pleasant to ride on an everyday basis, plus it will outrun just about anything on snow this year – guaranteed!