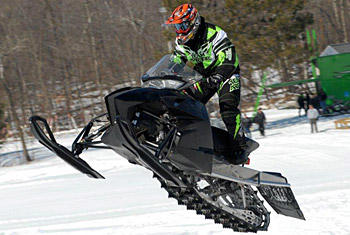 I’m really pumped that the new 2012 Sno Pro 600 race sled is built on the same ProCross platform that we regular riders will get.

After five years of racing a competition-specific machine that had little connection to most of its consumer sleds, Arctic Cat is returning to the “race-what-we-sell” program that defined the ZR and early-Firecat eras. I see this as huge step forward that has the potential to accelerate the continual improvements that inevitably happen to sleds during their lifespan.

Arctic Cat is at its best when the creativity and feedback produced by its race program directly influences all of its snowmobiles. The amazing ideas generated through race development are staggering, from entire chassis and suspension platforms to individual components.

Examples that come to mind: Torque Sensing Link, Extra Travel Tunnel, laydown engine architecture, Slide-Action suspension, and even the ProCross chassis (which was formulated based on what was learned from the 2008-11 race sled).

This past spring I witnessed handful of engineers and racers spending the day testing one of the early prototype Sno Pro 600 race sleds.

This particular race sled proto had already seen test time in both snocross and cross-country environments, but this was the first time that Ebert and Pallin rode this version.

While the new-for-2012 ProCross race sled added a new and exciting element to springtime testing, the scene that unfolded this day was a repeat of what happens every year at this time: take the best stock race sled from the current year (in this case, Dan Ebert’s stocker exactly as it came off the track at Lake Geneva two weekends prior), and use it as a baseline to compare, tweak and improve the next year’s sled.

Last year’s race sled was highly evolved and arguably the best stock machine in snocross and cross-country. The goal for the new machine is to be even better. On this day the focus was acceleration comparison testing up a groomed hill.

Ebert and Pallin took turns on each sled, lining up side-by-side and drag racing to the top of the hill, while the rest of the crew observed whatever differences existed between the two machines.

After 6-8 runs, the crew would head back to the Factory Team trailer, where a new clutch calibration, ignition map or suspension tweaks was given to the 2012 prototype. Then it was back to the freshly groomed hill where another 6-8 drags determined the efficacy of each change.

Notes were taken, racer feedback was solicited, discussions ensued and slowly but surely, a direction emerged in terms of calibration.

More test sessions followed, at this location and in the Rocky Mountains. Different Team Arctic racers were brought in to gather feedback and test calibration.

Because this year’s racer is all-new, the company wanted as much time as possible to test component selection and calibration, the production schedule is later than normal, with sleds being produced in early November.

I’m always a little tentative to make grandiose proclamations about new machines that haven’t yet faced the competition. If history is an example of what to expect, then there will be many things learned during the first several races, with the usual teething gremlins getting sorted out via steady, noticeable improvement. If the wins don’t come immediately, it won’t take too long.

I gladly welcome this learning curve element of the new race sled, because there’s a strong chance that what’s learned on the track will eventually improve what we ride on the trail.

To read more great Arctic Cat editorial by John Sandberg, visit www.ArcticInsider.com. Be sure to register so you can post in the forum!