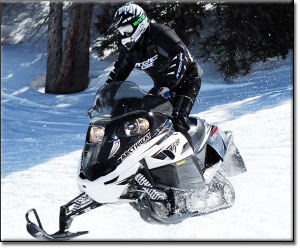 The model selection in the Twin Spar chassis has remained the same as last year but refinements to the sleds continue.

First, all F-Series Cats whether LXR, Sno-Pro or standard models, get the 128-inch track and suspension plus ACT drive with reverse. This year there will be only one choice of tailpiece/trunk storage bodywork for all F-series models.

Likewise, feature selection remains the same. Adjustable seats, handlebars and electric start come on the LXR. Sno-Pro Cats get the same with Fox Floats up front and last year’s adjustable windshield is now an optional accessory.

The dial-up windshield has been replaced with a selection of one-piece windshields offered in varying heights and tints according to the model. Sno-Pro models can be special ordered with the rare 14-wide track for improved top-end performance.

After riding these sleds and comparing them to our 2007 press units we noticed much crisper engine performance, particularly from the 600 and 800.

We believe this due to the remapping specs and continuing field testing of these relatively new engines.

The Sno-Pro has a noticeably firmer suspension than the standard version in the 600 to 1000 F-series and handling has been improved by a large measure.

The handling improvement is due to the change in the mounting points of the front swaybar on the bulkhead of the sled. These points are now much further apart.

The slightly smaller diameter bar offers more sway response and also, at the swaybar contact points on the A-arms, Cat has chosen different materials to eliminate the stiction issues from last year.

This swaybar is now borrowing from the left and right much better and reduced body roll is immediately noticeable. As a result this sled carves much harder and with less effort than the 2007.