ANOTHER HAY DAYS COMES AND GOES 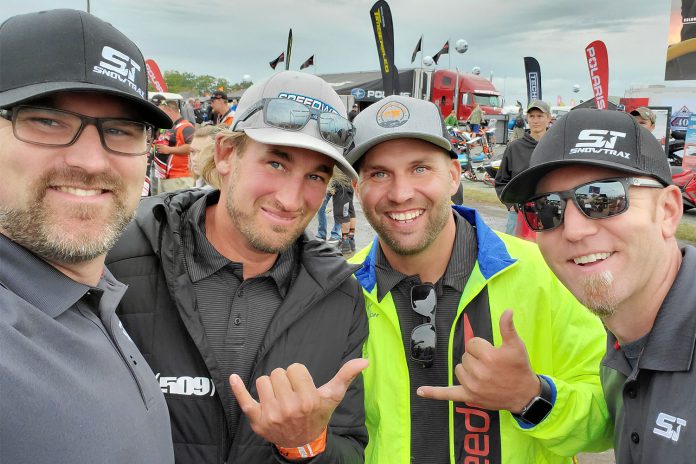 The annual kick-off to winter – the legendary Sno Barons Hay Days held in North Branch, Minnesota has come and gone.

Before we get into the nuts and bolts of Hay Days we want to shout-out a solid thanks to the hundreds of SnowTrax TV viewers who came to our booth or just grabbed us as we toured and expressed your appreciation for SnowTrax.

We were overwhelmed by the number of you who made purchase decisions based on SnowTrax Test Rides. On behalf of Luke, AJ and myself, we are humbled by your comments and want you to know you make it possible for us to continue to produce the highest quality, snowmobile specific television content in North America!

So here’s my synopsis on the largest outdoor powersports event in North America. While Hay Days has changed somewhat over the years to include multiple powersports activities and vendors, the event is still largely about snowmobiles.

Yes, the grass drags ran all weekend and no I didn’t pay much attention to them. In terms of interesting racing it was the UTV Championships off road stadium style SxS racing that caught the attention of thousands spectators. After that it was clearly the ATV and SxS mud racing. Yep, people are riveted by high speed motorized forays through deep swamp chocolate!

Of interest to you – our faithful snowmobile readers and viewers – was the annual assemblage of OEM snowmobile displays and the associated vibes each of the manufacturers were giving off.

Let’s start with Yamaha. They looked great in their jinormous display and it was well populated by snowmobilers. Lots of interest in the return of the updated 1049cc Viper and, of course, the Sidewinder variants – including reigning top speed champion, the SRX.

It seems the success of the SRX last year has attracted a lot of pure performance types to the Yamaha camp. We can tell you as of this writing no one outruns the SRX.

After a solid winter in the Midwest, the feeling in the Yamaha display was upbeat and optimistic. Yamaha has a strong interest in Snow Bikes as a result of the popularity of their legendary YZ450F motocross motorcycles. It’s pretty clear a lot of Snow Bike buyers attach the kits to Yamaha Off-Road bikes.

SD always occupies a lot of space at Hay Days and this year was no different. The legion of yellow underwearers was out in force and the Ski-Doo booth was mostly packed all weekend long. Ski-Doo put a lot of effort into the launch of a new film titled Escape Mountain featuring most (if not all) of their deep snow ambassadors.

The film which was debuted at Hay Days is not just a cornice jumping, extreme riding visual smorgasbord but more of a dramatic film where the riders are challenged by the world’s most extreme escape room on a mountain.

While the film was met with mixed reviews by Hay Day onlookers, we are curious to see what impact the film will make on attracting non-endemic viewers into the sport. Escape Mountain will be broadcast on Velocity channel later this season.

Ski-Doo’s focus appears quite obviously skewed to the deep snow, mountain market this year. According to industry sources the mountain segment is now the largest segment in the sno-mo-biz.

Ski-Doo wowed the racing fraternity with the intro of another edition of the MXZX 600 RS sno-X weapon. It is no secret Ski-Doo worked hard to get to the top of the sno-X podium last year. They appear committed – as far as competitive product is concerned – to continue to dominate sno-X racing around the world.

Polaris as a brand and in particular their display at Hay Days had something going on this year. There was an upbeat feeling among the Polaris staff, racers and ambassadors on site – like they know something’s shaking and the crowds in their display appeared stronger than we’ve seen at previous Hay Days events.