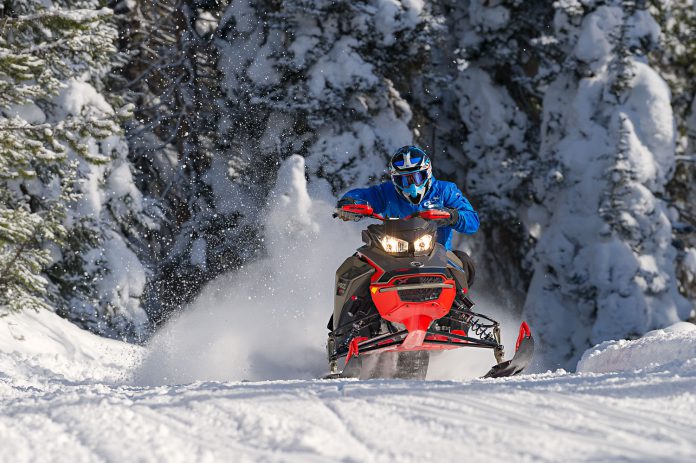 It looks like Ski-Doo’s decision to offer a turbocharged 2-stroke production engine was a good one. The Summit turbo and for 2021, the 850 Turbo Freeride, begs the question if there’s a bigger plan up ahead.

Most certainly, from the time the turbocharged 850 Summit was introduced in January, trail riders and lake runner’s imaginations have been running loose. You can only dream in Technicolor about a 200-plus horsepower turbo Renegade or MX-Z. Is it a pipe dream or not?

Ski-Doo put a lid on rumors pretty soon after the Summit appeared indicating the idea of a factory built turbo-2-stroke was only designed for higher altitude use and that under no circumstances does the turbo 850 produce more than the 165 max HP it is designed to produce at sea-level.

It is never-ever-never-ever intended for trail or lake sleds at sea level. That doesn’t mean that savvy computer gurus can’t tweak (and are doing exactly that) the waste gate controller on the new turbo.

Sounds like it makes sense – but the last time I heard, Ski-Doo was in the business of selling snowmobiles!

From everything we’ve heard SD does not intend to use the 850 engine with added turbo boost on trail sleds. Why? By the engineers’ open admission this engine was designed to produce and is maximized at 165-hp. To deliver more power using a turbo would require bigger rods, bigger crank and other expensive re-tooling activity which would amount to a whole new engine. The engine isn’t designed to deliver 200-hp, however, it is designed to deliver 165-hp reliably in the thin air at 8000-ft thanks to a turbocharger.

Having said all that, in our opinion, if this engine-turbo combo proves to be reliable, there’s a chance you’ll see a beefed up and massaged version on more sleds – including flatland models. I mean, really, can you imagine a 200-hp lake sled that was actually, genuinely light? Wow, we’re liking it!

Here’s another thought – and it’s a big deal. Ski-Doo is fighting to keep the market share dominance it has accumulated over the last fifteen years. What if a competitor beat them to the punch and offered an 850 Turbo Indy or a Procross 800 Turbo – even a Yamaha whatever with a turbocharged 2-stroke? It sends shivers up our combined spines thinking about it!

And another thought: Guess who is in the business of manufacturing turbochargers these days? Yep, Ski-Doo makes its own TBCGRs right in the Rotax plant in Austria and has a considerable use for them.

We wonder if once the shoe has dropped and the market has been toe-tested, if there’s a possibility Rotax might deliver a turbo 2-stroke for the masses.

Supertrax Onlinehttps://www.supertraxmag.com
Check back frequently for new content and follow us on social media!
Previous articleSome of The Best Snowmobiling Quebec Has To Offer!
Next article2021 Yamaha Mountain Max 154 800 2-Stroke Walk Around Overview!