4-stroke Use May Be Regional 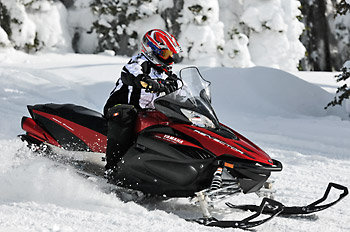 For a long time now we’ve been trying to figure out the formula for what makes snowmobilers buy 4-strokes over 2-strokes. We may have come up with something.

On a recent long distance trip to Quebec (over 1000 miles), one of our editors took note that a very high percentage of the sleds he was seeing there were 4-strokes.

He went as far as to say it looked to him like the ratio was almost two to one in favor of 4-strokes. At first, I thought he’d drained his brain but then I got thinking about it and he continued to insist his appraisal was accurate. Hmm.

If you’ve ever ridden in Quebec you know what the trails are like there. It’s not uncommon to see 24-foot wide trails groomed laser flat with wide, sweeping corners and 100-percent visibility.

In the particular area he was riding, remote Lac St. Jean, the trails are so wide and smooth you can literally hold your throttle to the handlebars and still wish you had more power. We certainly don’t recommend riding like this but it goes without saying, trail speeds are pretty brisk in this neck of the woods.

Here’s the thing: Because of the nature of the Quebec trail system, riders are looking for engine power that has big-time torque, and engines that will outlive the riders’ ability to destroy them.

Even the most savvy snowmobiler has to confess that the current list of 4-strokes on the market offer a level of durability and life expectancy far beyond anything 2-stroke owners have experienced in the past.

Yes, we agree, most 4-strokes don’t deliver the pinpoint handling and extreme lightness of 2-strokes but those factors just don’t come into play at the same level when you’re riding 100-plus mile distances between stops on trails like I just described.