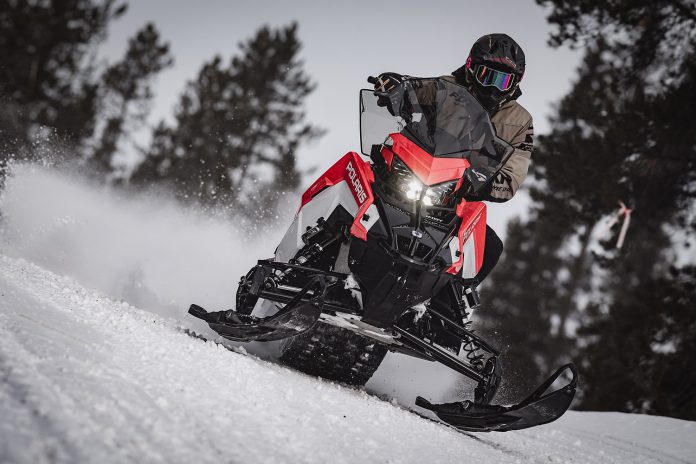 With the snow melting and the season ending in many areas, there will be tons of speculation continuing about the all-new Polaris ProStar S4 snowmobile powerplant.

We’re already hearing from our info-hungry readers and viewers about power and top end comparisons to the competition’s 80 to 95 HP 4-stroke engines.

And yes, we’re hearing questions about the new S4’s effect on the lightweight Matryx chassis. We’ll pretty much confine our commentary to addressing the weight question. For the record, it would appear a new Indy S4 Matryx XC 137 comes in at 590 pounds, give or take a few pounds.

In comparison to a Polaris Patriot 650 powered similar model, this is a jump of over 100 pounds. While that is what it is – it is also a comparison between apples and oranges.

The 999cc Pro Star is arguably a 90 HP 4-stroke while the 650 Patriot is a 135 HP 2-stroke. 2-strokes produce significantly more power per cc and weigh much less to produce that kind of power.

So how does the S4 twin compare to the industry’s most prolific 4-stroke engine in terms of weight? If the reported numbers from the OEMs can be trusted (and we have no way of verifying weight claims on a new snowmobile we have had limited access to), then the S4 comes in around 60 pounds heavier than the ACE 900 triple.

The S4 uses a 270/450 firing sequence which does not provide enough vibration control to preclude the use of a gear driven counter-balancer. As the S4 sits, it is buttery smooth at idle all the way to its 8000 RPM shift speed.

The counter-balancer is exactly as its name implies – it’s a “counterweight” and no doubt contributes materially to engine weight. The S4 also uses a dry sump oiling system which allows the use of a shallow oil pan, but a remote oil recovery tank must be employed to supply lubrication.

These realities add up to increased weight, but both measures deliver tangible performance improvements to the new Pro Star mill. The counter-balancer ensures long clutch life and rider comfort by eliminating vibration, and the dry sump oiling system allows the S4 to be placed lower in the MATRYX bulkhead to ensure legendary Polaris handling is preserved with 4- stroke power.

WHERE THE RUBBER HITS THE SNOW

When it’s all counted, rationalized and explained, weight ultimately comes down to just two issues: “How does it handle and how fast is it?”. After two separate exposures to the S4 – one at sea level and one at 6000 feet in Yellowstone, Montana, I can say with confidence the MATRYX chassis is happy with the S4 nestled under its hood.

Initial turn-in is strong and the S4 equipped MATRYX carves twisty terrain very capably. Our only gripe is Polaris’ use of “Dualy” carbide runners that numb the strong turn-in the MATRYX is known for. Thankfully you can enjoy much more positive bite past initial turn-in with a switch to 4 or 6-inch single rod carbide runners.

Most of the miles I’ve tallied on the S4 came on trails around West Yellowstone. I put on a lot of miles at this altitude and found the top speed of the S4 Matryx to be down by about 5 to 7 MPH (8 to 11 kmh) from sea level riding. The counterbalanced, twin cylinder 270/450 Pro Star produces a torquey and linear response to throttle inputs.

It comes down to whether or not the MATRYX S4 feels heavy. Interestingly, we never got the weight info until after Yellowstone, so our impressions were not tilted in all the miles we carded on the sled.

I can say with confidence if you’re a connoisseur of 4-strokes you’ll be impressed by the handling, power delivery and smoothness of the new S4 Pro Star.