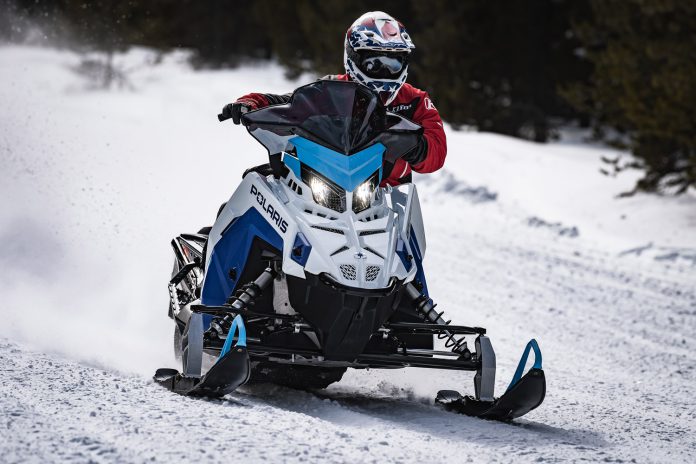 I’ve had the privilege of amassing considerable klickage this year in advance of and after Christmas. Unfortunately, it all came to a screeching halt the Thursday before New Year’s when the temps rose and the rain fell. Supertrax/SnowTrax World HQ is in a holding pattern in need of six inches of snow to get running again.

Enough trivia, we’ll get down to some technical verbosity on an impressive 2023 ride. The ride? It’s the Polaris MATRYX Indy SP 650 with a 137 sneaker out back. I felt like I never got enough time on our 650 Indy PR unit last season so I grabbed this unit as soon as Byers Equipment in Orillia, Ontario called me to pick the sled up.

First and foremost, I want to speak to the Patriot 650 SDI mill. This engine is heavily based on the 850 Patriot powerplant and as a result there is little, if any, weight saving going on here. However, in terms of efficiency there’s a lot going on.

Polaris’ tried and true Liberty 600 has been around for more than a decade and it shows it when compared to the new 650’s amazing fuel economy. We witnessed the claimed 15 percent improvement almost immediately.

Better than just a fuel economy jump was the reduced smoking with the 650. Most importantly is the improvement in overall performance. The 650 produces an arguable 135 to 140 HP. The reason we can’t be specific relates to Polaris’ ongoing reluctance to release HP numbers. From a comparison standpoint, the 650 will run almost ski-tip to ski-tip with the former 800 Liberty. Interesting.

Power here is abundant and just as impressive is the smoothness and refinement of the Patriot based 650. Engagement is ultra-smooth and drive-away is vibration free. The surge of thrust when feeding throttle to the engine is linear but noticeably stout. Once underway your right thumb feels more like an extension of your synapses. This righteous response can be mentally willed directly into the 650’s throttle bodies.

The P-95 clutching combo loves the torque curve of the 650 and it is so much less a screamer than the old 600 Liberty. When pulling away it’s all about a huge upshift, then RPMs settle into the meat of the power curve. One ride on a 650 and you’ll be convinced this is among the nicest spreads of power from any engine in the biz right now.

The MATRYX has already established itself as the handler in the industry. We find it to be the most intuitive corner carver among all the competition. Initial turn-in to about 15 degrees of handlebar input is linear and positive.

The sled begs you to go harder toward the apex with the promise the front end will bite progressively to the center of the turn. Once you’ve dropped the brake and completed your pivot, feed the 650 some throttle and feel the tail comfortably swing out and look for traction.

There’s no understeer or push. It’s up to you at this point to either keep opening the throttle or steer out of the controlled slide. I don’t know about you but I want a sled to handle this predictably when I’m facing a salad of twisty and challenging trails.

Ride quality here is good but not as good as it could be with a better set of compression adjustable dampers up front and on the rear arm. The SP has aluminum bodied, non-compression adjustable, non-reservoir IFP shocks. Of course, this would mean a higher MSRP and when it’s all said and done the 137-inch PRO CC skid does produce a comfortable and near bottomless ride.

So, if you think you want more damping control and a measure of added “plushness”, opt for a VR1 Indy MATRYX with Walker needles. Of course, you won’t be able to find an unsold VR1 so you might consider a set of aftermarket shocks.

After over 300 miles (500kms) on our SP 650 I am genuinely impressed. We’ll have more as the season progresses.