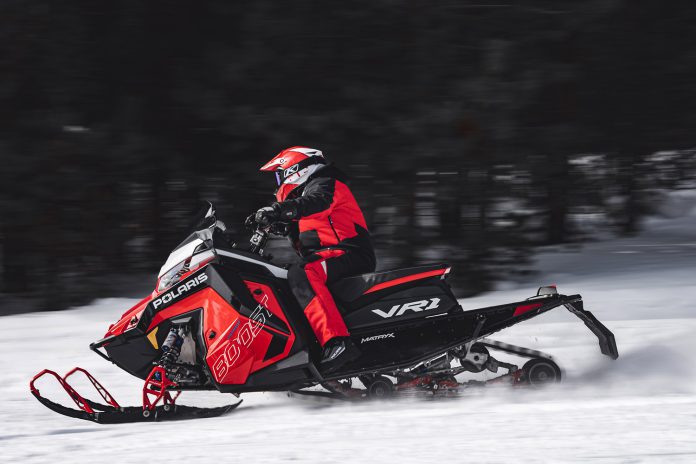 Yeah, I’ve already ridden the Boost, once in Cook, Minnesota last January and again in West Yellowstone in February.

I’d say I was impressed but that just falls way short of describing the reality of squeezing the loud handle while sitting on that much power.

However, both these riding locales are not in my backyard and I really want to sample the new trail-targeted turbo 850 Patriot Indy VR1 on familiar trails and lakes.

The reason I want to ride the new VR1 Boost on our trails here at SnowTrax/Supertrax World Headquarters is this: I want to experience (again) what felt like lightweight handling in a turbocharged sled.

It’s not that this wasn’t obvious on my first rides but simply put, it’s what I need to expand my frame of reference in terms of how this comparatively lightweight turbo plays out.

If you’re talking turbocharged snowmobiles built for trails then the Indy Boost stands by itself as the only 2-stroke powered offering in a fairly busy pack of 4-stroke turbos from Ski-Doo, Arctic Cat and Yamaha.

It’s no secret 4-stroke sleds are heavier than 2-strokes, but throw a turbocharger on a big displacement 4-stroke and that weight becomes tangible to experienced riders.

What I experienced with the Indy Boost runs counter to the current weight penalty you feel with 4-stroke turbos.

Unfortunately, it looks like I may have to wait until January to experience the Indy Turbo. Polaris has to satisfy its paying customers before members of the media get their gloves on a Boost and we totally understand.

I can tell you this: Cook, Minnesota is not at any substantial elevation so when I rode the Boost there last January it was in sea-level grade air. The surge of power from the Patriot 850 turbo reset my seat-of-the-pants meter and left me mostly speechless. The power was truly impressive.

So, stay tuned and as soon as we get our hands on a VR1 Boost we’ll report back.