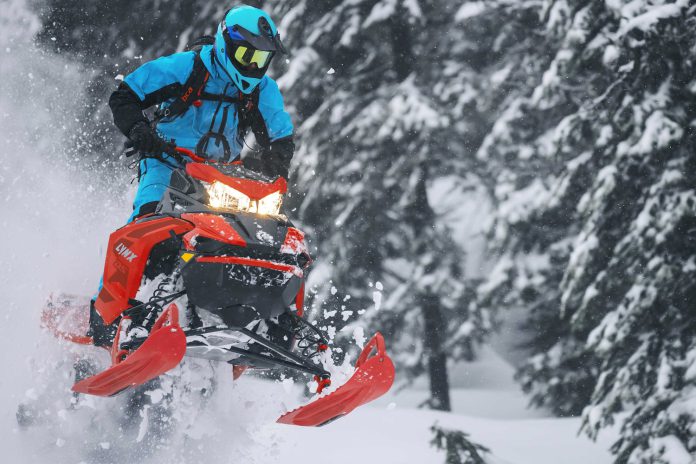 We’ve been inundated with responses to our YouTube and website postings about the new Lynx RAVE RE.

Frankly, your responses have set and broken records for anything we’ve ever posted in all the years we’ve been doing so.

With so much hype directed at the RAVE, we’ve been negligent in giving you much data on the other Lynx BRP is bringing to North America, the Boondocker.

This sled is equally as unique as the RAVE RE. With choices of 3900mm (153.54-inches) and 4100mm (161.42-inches) tracks and track depths of 2.5 and 3.0-inches, you’d expect the Boondocker to be targeted specifically at high altitude, pure vertical surroundings out West – much like the Ski-Doo Summit.

Although it is very competent in vert applications and can be ridden capably in the mountains in the same way a Summit could be, there’s a difference.

The name “Boondocker” is a clear hint this sled is aimed at a deep snow rider that requires high altitude props when required, but also wants to play in powder in less steep terrain.

The second hint is in the Boondocker’s PPS2 DS skidframe. This Finnish design, also used in a similar version in the RAVE, utilizes the same behavior we’ve observed with the RAVE’s PPS3 to enable the Boondocker to climb and dig-out in soft, powdery snow.

As you know, if you’ve been reading our impressions and watching our YouTube videos, the PPS skid pushes the rear of the track downwards, deeper into the snow when throttle is applied and when there is forward momentum. Because of the skid’s downward action under power, it tends to keep the front of the sled light and hold the skis up on top of the snow.

This engineering principle actually works really well when applied to powder riding, and makes the Boondocker a very efficient sled in that environment. This same principle is why deep-snow-specific skidframes are uncoupled.

Let’s go back for a moment and review what it’s like to ride in Northern Europe. Although there are some very high ranges and elevations, particularly in Norway and somewhat in Sweden, the terrain can on average be described as hilly, rolling, rocky, forested – with incredible snow depth.

Also, in the rest of Europe, and particularly in Germany, Austria, Italy and Switzerland where there is a lot of mountainous terrain, for eco reasons, motor vehicles are not allowed to enter those areas. Where allowed, deep snow riders need to find places to “boondock” in less altitude.

What this means is that a suspension like the PPS2 DS may be used in conditions where there are mountain passes that are packed down or in foothills where the climb may not be as steep but equally challenging because of snow depth. It may often include long, untramped, open, ungroomed passages on flatlands with no previous snowmobile footprints.

Because of its design and behavior, we’ve heard more than one deep snow rider claim the Boondocker makes an excellent hillclimber. Just like the RAVE, the PPS2 DS allows the sled to handle the kind of brutal terrain that gets packed down in a hillclimb race without exhibiting scary behavior on the way to the top. Since these events are 100-percent throttle-on affairs, it plays to the PPS2 DS’s strength.

We can think of a ton of places in North America where the Boondocker could be a hit. Actually, the whole middle and east side of the continent has places where the terrain mirrors much of what we’ve just described. In fact, there may be more riders experiencing that type of terrain than there are high altitude riders in the west.