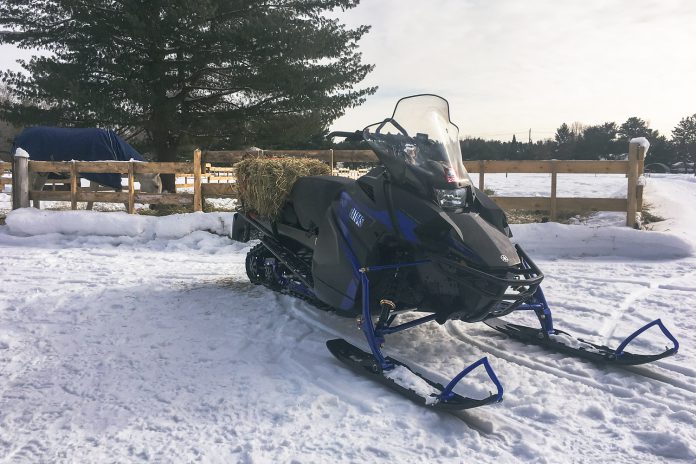 We recently received a couple of new 2021 models from Yamaha Canada and had the opportunity to try them out on our local trails.

Yamaha loaned us a trail-based 121-inch Venom (the base model) and a 146-inch Transporter Lite.

Both sleds use a 397cc EFI single with a CVTech primary clutch and Invance secondary, are well equipped with electric start and reverse, a tidy digital gauge on the dash, a tether switch and one-speed hand/thumb warmers.

Our first sampling on this particular day was the 146-inch Transporter Lite and it actually both surprised and impressed us.

We know some of our hardcore readers won’t necessarily spasm with curiosity and excitement about this utility-targeted lightweight but we’re here to tell you it’s a really good sled when applied to its intended purposes.

The fact is, both the Venom and the Arctic Cat BLAST are aimed at a value conscious market that usually includes new riders, teenagers on their first full-sized sled and women who don’t want to lug around a more powerful or heavier piece of iron. Applied this way, the sled is more than ideal – it’s perfect! Using it as an off-trail sled makes even more sense!

What surprised us were its other capabilities. In the past we’ve been critical of both the BLAST and the Venom for not having a sway bar. After riding it on fairly high-speed, twisting trails, we have to confess it doesn’t matter that much. The sled stays level and turns in predictably, although limited a bit in the precision department by its deep-snow skis.

Although the uncoupled skid was expected to be harsh, it really isn’t. This full 15-inch-wide track is articulated and has 1.5-inch lugs and works in harmony with a skidframe that is nicely calibrated to handle bumps at reasonable trail speeds. By the way, get used to reasonable (speeds) because this longtrack appears to be geared low and although the 2-stroke single delivers really good torque, it doesn’t exactly propel the Transporter at break-neck speeds.

What it does is deliver nice bottom end and especially good mid-range power to keep the rider fully entertained. The sled is responsive, fully flickable on the trail and feels as light as a Styrofoam-injected feather. There’s so much track here in comparison to the overall mass of the sled, flotation is never in question.

It really excels when you hit the deep powder. We were curious to see how good this sled was off-trail and it truly didn’t disappoint. We hit the powder running and immediately discovered the snow was a lot deeper than we anticipated. No worries at all! The Transporter Lite dug in and literally floated its way through the stuff!

Steering was surprisingly accurate because of the Lite’s wide skis. We backed off the throttle to see if it could accelerate back up through the powder and that’s exactly what it did. The nose was high and the track was churning and it just paddled its way to the top. Tunz of fun!

We liked the seat and the windshield was a B-plus. We wish the manufacturer had splurged on 2-speed hand heaters (they only work on Scald and Off positions) but overall, the Transporter Lite is comfortable and easy to love.

The sled does feel small from the driver’s seat but not as small as the vanilla 121-inch Venom.

In our opinion, this is the most desirable Venom-series for buyers who want the most for their buck in this class of sleds. We definitely feel the upcharge for the longer track and tunnel, wider skis, better windshield and increased versatility is well worth the extra moolah. This is our fave Venom!

Oh, and don’t let anyone tell you this is just a utility snowmobile; it’s too good on trails to have to wear that name tag!

Kent Lester
Kent Lester is Co-Publisher of SUPERTRAX Magazine and a regular contributor to this website.
Previous article2022 Lynx RAVE RE or Ski Doo Renegade XRS
Next articleDeep Dive Into Yamaha’s 2021 Snowmobile Lineup