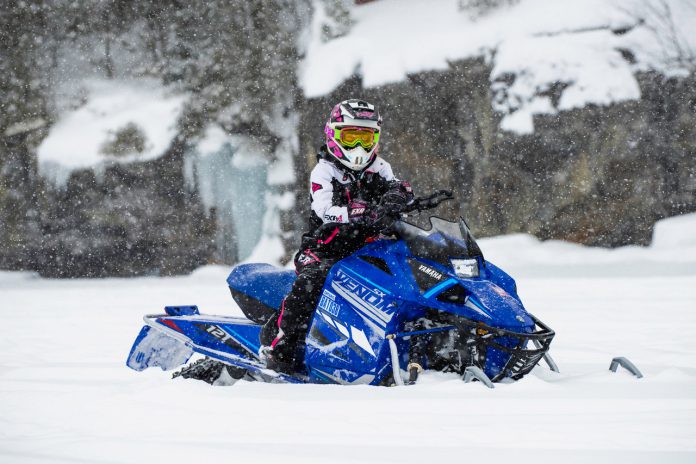 We’ve had a 2021 Venom in our test fleet for several weeks now and have had the opportunity to let a number of different riders experience it.

Generally, feedback from the teenagers who have tried it out has been 100-percent positive. They like the way it looks, have no complaints about its ride and especially like it’s strong, torquey feel on acceleration.

It does this little thing in take-off that is both fun and endearing: It pulls little two to three-inch “ski-wheelies” when traction is good and it makes the sled feel responsive and quick.

Back in the day, Yamaha’s 250 Enticer single did the same thing and it was one of that sled’s most loveable tricks. There’s a very real possibility the Venoms relatively short 121-inch track with only 14-inch width and much less rotating mass, adds to the snappiness you’re getting with this 397cc EFI single.

Our young riders liked the fact the Venom feels very light at the handlebars and can be wound down twisty trails with so much confidence. Generally, according to their feedback, the sled feels a lot smaller from the driver’s seat than what it is. It projects inherent lightness and agility and it makes novice riders feel safe.

Some of the adult women, more experienced in trail riding, who rode the base Venom were more critical of its comfort features. Biggest complaint was the lack of a warm windshield – we strongly suggest you order up a mid-height one from the Yamaha parts department – and its single temp-setting hand and thumb warmer setup.

The comment was because there is no medium setting it required the rider to fumble around trying to locate the switches several times during a ride to get a comfortable temperature. This is a very real gripe from this type of rider.

We were surprised none of our samplers commented on the Venom’s lack of a sway bar. The sled handles really well on both semi-hardpacked and loose snow in trail situations and about the only time we observed any lack because of the absence of the sway bar was on lakes where the sled was doing a slight side-to-side “wallow” when the skis were in three or four inches of powder. This behavior is very minor and certainly not pronounced enough to make a novice rider feel uncomfortable.

On trails, the sled’s perky midrange and smooth demeanor make the trip enjoyable. At 65-hp, you’re looking at about 60-65 actual top-end mph and that seems like enough to satisfy the performance needs of riders shopping this category.

This particular Venom model is very comfortable, with plenty of legroom for taller riders, good grip on the running boards and the seat is firm but comfy.

Based on what we’ve seen, the baseline Venom with its 121-inch track has plenty of appeal in its price range and its ride, power and handling are certainly sufficient in this class. However, for a more complete second sled experience we’d recommend you ante up the extra coin for the Transporter Lite.

The price is not that much more but with a longer articulated track (15×146) and the same power package, it gives you a lot more versatility, including a bit more trail plushness and the option to ride off-trail.