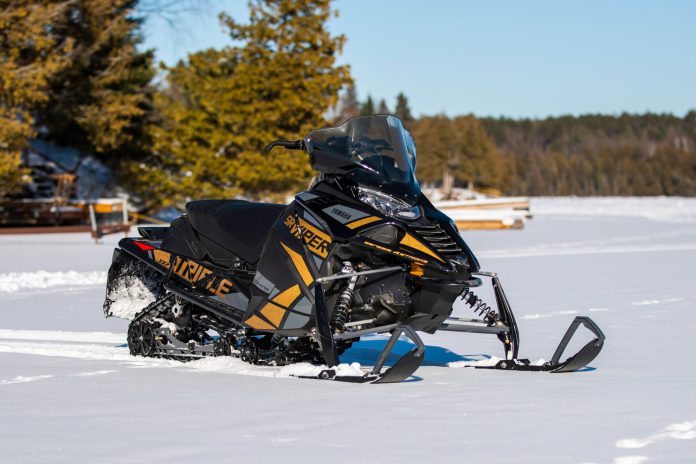 Yamaha Canada loaned us a new SR Viper LT-X GT with a standard-issue 137-inch track for a few weeks and we’ve had a good chance to put it through its paces.

At first glance, the Viper looks pretty familiar. It still uses the stellar 1049cc 4-stroke triple, spinning a belt-friendly YXRC clutch combo and it all rides on a tall front spindle IFS and a floating front-arm rear skid. There’s a sweet set of Fox QS3 shocks in in the mix as well.

In order to appreciate the Viper’s impressive 4-stroke performance, you have to plant your butt on its seat and take it for a ride. It takes about fifty feet to realize this is a seriously strong running snowmobile. Yamaha’s engineering team have been hard at work refining the details, amping up the power and torque and improving the Vipe’s ride and handling.

The recent update to quick-remove plastic bodywork was both an aesthetic and convenience improvement – but that’s old news now. Trust us – access to service items like the dry sump oil reservoir and the clutches is exponentially easier.

What we noticed first was the dramatic handling improvement gained by use of Yamaha’s new Stryke skis and tweaked spindles. Steering effort is markedly lighter, corner carving is completely linear and there is absolutely no darting or hunting on trails.

These skis take a line and hold it securely without any sudden and unwanted “lane changes” – and frankly, it makes the Viper feel like a completely different sled.

Last year Yamaha re-programmed its CPU and made some subtle tuning tweaks to bring the Vipe from its former claimed 125-hp to 130. We suspect there was a gain in torque numbers as well because this version pulls notably harder at the top of its speedometer.

The original 1049 was always a strong mid-ranger. The new calibration makes the Viper a serious contender down the lake at WOT. The Vipe keeps pulling and delivers not just strong bottom and mid-range but top end power rivalling 600 2-strokes at the end of the lake.

We did a top end run and the Yamaha speedo registered 150 km (93.2 mph). Pretty much what we expected, but the fun was in getting there. Acceleration was super crisp and throttle response was very immediate, especially at the top half of the speedo.
(FYI: A few years ago we wrote a speedometer accuracy test comparing all four OEMs and found Arctic Cat’s speedo readings to be the most accurate – about 97-98-percent true to the GPS. That was then and this is now, but we hope the Cat speedometer still remains so accurate. Keep in mind, the Viper uses the same instrument supplier as Cat.)

Yamaha has taken some criticism for not updating its skidframes commensurate with Ski-Doo and Polaris but honestly, we found the Viper’s sliding front arm, coupled skid rode really well in harsh rolling bumps on-trail and handled stutters with invisible competence.

Some of this compliance is due to use of Fox QS3 shocks up front and on the skid’s rear arm – but we can’t help but think someone nailed the calibration on those QS3’s.

The 137-inch Viper GT comes standard with a really sensible and sumptuous tunnel bag for storage and a two speed heated seat.

This is a snowmobile you can ride for hours and hours and never feel fatigued. We think the Viper best epitomizes what a 4-stroke sled should be. It’s easy to ride, powerful, plenty fast and may be the industry’s best reason to choose a 4-stroke over a 2-stroke.

Oh yeah, one more thing you tell us you love about 4-strokes – you don’t have to carry bottles of oil!