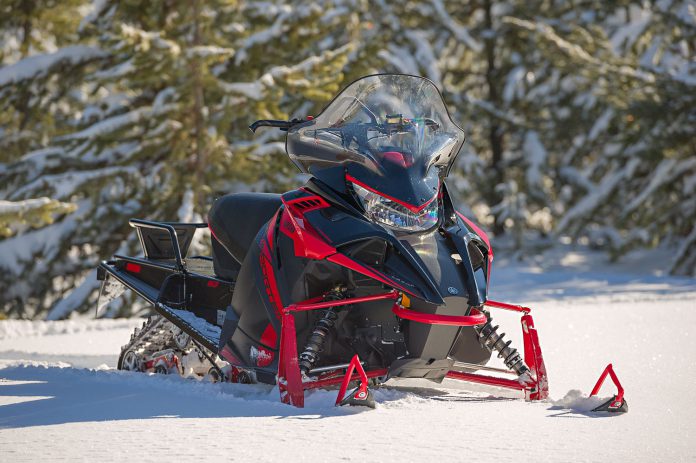 Yamaha has already opened the door to producing a credible 2-stroke snowmobile again. It’s called the Transporter and it’s believable it could fill the gap in Yamaha’s product line not served by the company’s 4-strokes.

To be brief, the Transporter can serve as a utility sled (articulated track), an Adventure Rider in deep snow (has a 2.25×153-inch track), a 2-upper (optional 2-up seat is available) or as a trail sled (nice, lightweight 600 DSI power and AWS handling).

Okay, we agree the Transporter may not be the first choice for riders in any or all of these categories, but to a 2-stroke-hungry Yamaha buyer, it makes tremendous sense and could easily fill the bill in at least a couple of those categories.

So, the obvious question would be: What if Yamaha wanted to amp up its 2-stroke presence even more in 2021? What would a serious Yamaha 2-stroke look like?

First, we don’t believe it would be an 800. An 800 would dip into the SideWinder’s marketplace too much and would only build on the “same-as Arctic Cat” doubters’ debate. Also, Cat is likely going to introduce an 850 someday and Yamaha may not want to tag along with that.

We think a 600 would make the most sense – it grabs a huge market and Yamaha dealers would only need to stock one engine’s parts on their shelves, given they are already servicing the Transporter.

So how would it fit into the Yamaha product line?

It would be a great time for Yamaha to reignite the old “Exciter” nameplate and appease the cravings of hundreds of Yama-fans who have wanted a 2-stroke for years.