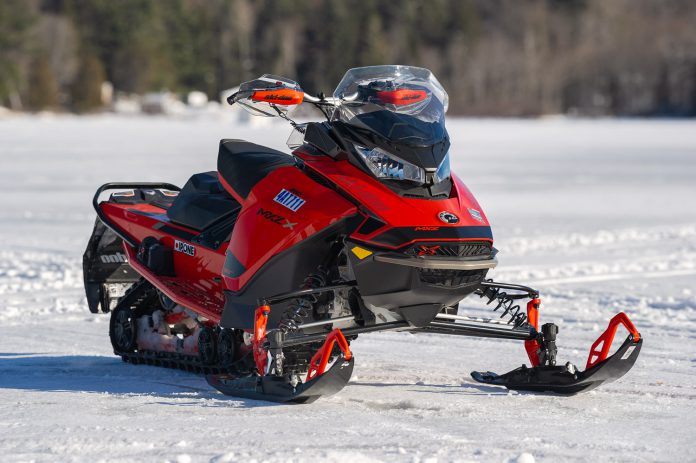 We have two 850 E-TECs in our fleet this year – one a Renegade and the other an MX-Z. Both are very well equipped and have given us a well-rounded opinion on their performance and ride-ability.

First, the MX-Z. This one is an “X” version and when we first rode it we were saying to ourselves: “This 29-inch version is great and I actually prefer it over the 137-inch Renegade!”

The shorter track allows snappier handling with slightly quicker turning (than the Renegade) and the sled just feels lighter. We know, it is lighter but that sensation is clearly delivered to the rider.

No complaints with the power here on either sled. This Direct Injected 850 starts instantaneously, doesn’t smoke and runs flawlessly – no matter what the temperature or humidity. Power feels pretty endless whether you’re accelerating from corner to corner or just taping the flipper to the bars out on a frozen lake.

This version of both the 137 and the 129-inch length rMotion performs admirably. There was no time when we were surprised by an invisible square-edger or pothole in the trail for one of those “oh-no” moments. The skid just sucks it up and asks for more. Great technology!

The big deal here, and the truly new tech on this sled is its front end handling change. Ski-Doo’s newest “RAS X” front end offers a wider-by-1.8-inches ski-stance, new upper and lower A-arms and new spindles. However, you could be misled into thinking the handling change is just all about the front end. It isn’t.

Ski-Doo has completely changed the rMotion (now called rMotion X) out back to work in compliance with the RAS X front end. There’s a new 13mm longer front arm and where the front arm mounts to the skid rail there’s a cam adjuster (Ski-Doo calls this the “Weight Transfer Adjuster”. It’s designed to vary the amount of transfer the sled has on acceleration by changing the leverage of the front arm. The rear arm is also a few mms longer – and Ski-Doo claims the whole unit is about 5-lbs lighter.

Apparently, this year the goal of Ski-Doo’s engineers was to make the Ski-Doo chassis corner flatter. There had been complaints about ski-lift and non-linear responses up to the apex of corners with the old RAS 3 setup.

The new front end tech and the fairly major changes to the skid have resulted in a very flat, skis-planted-on-the-snow demeanor. As we mentioned, ride compliance hasn’t been compromised.

We noticed with both sleds, the front end does stay much better planted – even to the point of both skis pushing or understeering sometimes, depending on the type of snow you’re riding on (this was more pronounced on the Renegade). We got the best turning results on medium-loose snow using the adjustable skag Pilot X skis with the carbides dialled really deep. This, unfortunately, increased steering effort considerably.

Our sleds are equipped with Ski-Doo’s “panoramic” 6.8-inch digital display with a rotator knob located ahead of the rider’s left knee. Although the info was helpful, we found the operation of this setup to be lacking. Best to set it up thoroughly before you ride and not mess with it enroute unless you’re completely used to how it works.

One further comment: Both our Renny and MXZ have rear shock damping and spring adjusters mounted on the running boards. We have made good use of these and honestly, it’s one of the best options you can add to a Ski-Doo. It’s especially useful when different sized riders are piloting the sleds and you want to max out ride compliance.

We should also mention we haven’t found a great deal of difference in the ride, handling or performance of the X versus the X-RS. Yes, the XR-S has a slightly different range between full soft and full hard when you’re dialling in damping but because of the aforementioned tune-ability of the running board adjusters, you can get exactly the level of compliance you’re wanting.

The X has less front end adjustability, however, because of the difference between the X-RS’s premium front end and the X’s KYB gassers with no damping adjusters.

In conclusion, we have to say the X is a very nice package and although the X-RS offers a more sophisticated shock package, depending on how you ride, they’re both pretty close.