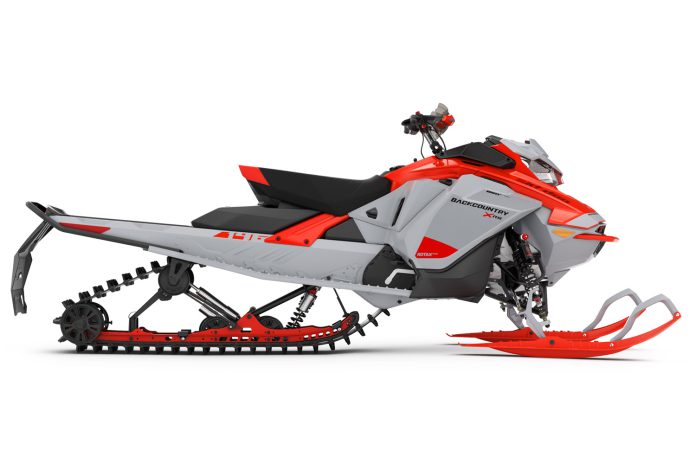 We wanted to take a closer look at four very popular 2021 snowmobiles in order to rate them. We’ll be posting details and opinion over the next few days and we’d really like to hear feedback from you on whether you agree or disagree with our appraisals.

These four crossovers will comprise a significant number of snowmobile sales for each of the companies offering them. They are – in no particular order: The 2021 MATRYX-based Polaris Switchback, Ski-Doo’s Backcountry X-RS, Arctic Cat’s RIOT and Polaris’ AXYS-based Switchback Assault.

We’ll be looking forward to your comments!

This snowmobile is the hands down best deep snow X-over in this segment. Why? Because its oh-so-close to a full-on Summit mountain ride. In fact, this BCXRS could chase down a few credible full-on vert roosters based on its 146-inch shoe, mountain depth lug and Summit ergonomics. The Backcountry X-RS wins if you’re talking ultimate deep snow prowess.

Unfortunately, the class the Backcountry plays in is not about just one thing – and herein lies the disparity. By its very nature, the Crossover class is about doing more than one thing – and doing both those things really well.

As we said, if we were to compare the BCXRS to a group of mountain sleds it would in all likelihood score very well amongst that genre. However, when you put it ski-tip to ski-tip with the X-over competition, in particular the Polaris MATRYX Switchback Assault 146, the BCXRS isn’t the best sled in this class.

Before sending hate mail and because repetition is the law of emphasis, we’ll repeat our earlier assertion: The class the Backcountry is targeted at is definitively dual purpose in nature. It’s called the crossover class for good reason. Players here must do more than one thing really well.

We’ve covered what the BCXRS does really well – deep snow, off trail riding including lower elevation vert navigation. In these situations and these alone, the BCXRS is way hard to beat.

Where it isn’t so hard to beat is in the other half (or more) of the use parameters sleds in this segment are (supposed to be) designed for. More specifically, trails.

The Backcountry’s narrowed up IFS is not the latest RAS-X trail setup but rather a more mountain biased compromise. The cMotion uncoupled skid is excellent in deep snow applications but can’t be compared to Polaris’ IGX crossover skid’s ride on whooped out, high speed trails. Same when it’s compared to the RIOT’s ride.

The combination of Polaris’ variable castor trail IFS with the plush and balanced IGX out back and more dual purpose oriented ergonomics is unbeatable on trails and still dawg-gone capable in deep snow. All of sudden Ski-Doo’s overbalanced desire to own the crossover segment based on deep snow prowess, actually holds the BCXRS back.

Ski-Doo claims (and I mostly believe them) they listen to their customers to come up with sleds that are exactly what their customers want. We get that. However, listening to customers who have two completely different sets of expectations for just one sled requires asking a very unusual set of questions.

A crossover that absolutely rips the pow, but is less than expected on trails isn’t answering what the buyers of X-over rides are asking for – in totality.

Consequently, this segment may possess the most difficult-to-understand buyers in the entire sport.