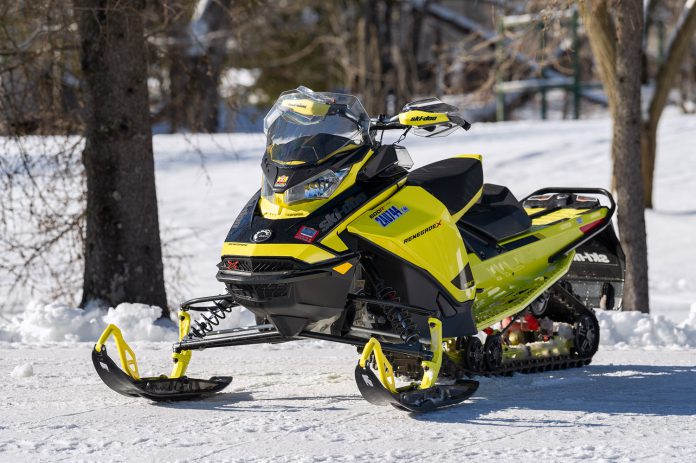 We’ve had a 600R Renegade in our fleet a while now and have had the opportunity to ride it in in all sorts of situations and in different temperatures and snow conditions.

From a reliability perspective it’s been flawless, always starting instantly as only an E-TEC can, and performing great with excellent acceleration and surprising top end.

This particular Rennie is an X model, not equipped with running board mounted spring and damping adjusters or Ski-Doo’s latest cell phone connected digital instrument package. Frankly, we miss the external adjustment feature a lot more than the dash whiz-bang which takes a lot of concentration to use comfortably.

Speaking of comfortable, this sled’s rMotion skid never fails to blow us away! This version is called “rMotion X” and features longer front and rear arms and a weight transfer adjuster so you can make the skid transfer more or less on acceleration.

Be warned, if you choose to dial in more transfer you will inevitably lose some of the Renegade X’s flat cornering demeanor. We left the setting stock, as delivered, so we could get a better idea of how the new RAS X front end worked.

RAS X features a long list of new front end parts, including spindles, upper and lower A-rms and longer tie rods, sway bar etc. The extra 1.8-inch width delivers more travel and, combined with the skidframe mods, turns the X into a very flat-cornering sled that has almost no inside or outside ski-lift on all snow surfaces, no matter how hard you crank the bars.

As we continued to put more miles on this Renegade, we grew a bit more doubtful about the effectiveness of the RAS X setup. Despite the bag of new parts applied to this design we found the X had a noticeable tendency to plow or oversteer on groomed trails in medium hard-packed snow and especially, on loose snow, as speeds increased. We experimented with longer and deeper carbides but the tendency was still there and steering effort, of course, was increased noticeably with the bigger carbides.

We’re still working on this and after a brief meeting, decided we’d like to try the RAS X on this sled with the Weight Transfer Adjuster set so there’s more weighting of the outside ski on cornering and less flatness. We’ll let you know how that turns out (it’s not a very simple process to change the WTA and requires shop time to disassemble and re-assemble the cam-style adjuster).

One other observation we registered about the 600R, especially after putting a different group of riders on the seat, was its relatively abrupt belt engagement both on low-speed take-off and while riding rough trails at low speeds. We wanted to blame the pDrive’s roller primary for this but after speaking to some SK engineers, discovered it has more to do with the E-TEC’s mapping program at low RPM than with anything to do with clutching. Probably a lot of experienced riders will actually like this jerky response and feel it makes the sled act like a racer on the starting line – but put a novice rider on the seat and it scares the beans out of them.

We think this whole effect is less pronounced on the 850s than on the 600 – maybe because of the giant lump of torque the 850 makes off engagement – however, it’s still noticeable on both engines. Keep in mind, this trait only evidences itself off-engagement or on rough trails when you’re nursing the throttle over deeper moguls. Get into the midrange and the E-TEC is nothing less than silky smooth.

Overall, as the snow depth increased and the trails got smoother, we started to love the Rennie X. With a high level of riding comfort and an impressive performing engine, this sled has found a place in our hearts.