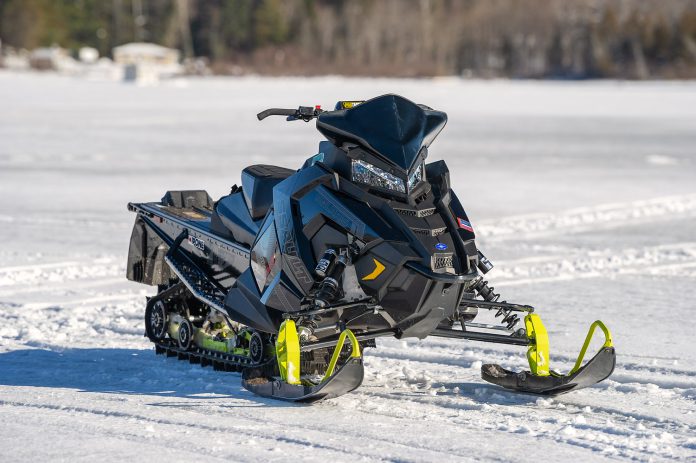 Few new snowmobile models have dominated any class in the past five years like the Polaris AXYS Switchback Assault. What’s remarkable about this accomplishment is how many really good sleds there are in this segment.

Even though there are competitive differences that allow for picking winners in SNOWTRAX comparos and shootouts, there’s one sled that has continued to stand at the front of the X-Over class year after year.

Yes, my snow obsessed friends, Polaris has been slaying the rabidly popular X-Over class steadily with the AXYS-based Switchback Assault in either 600 or 850cc flavors. So successful at doing dual duty is the Assault, Polaris elected to continue production of the AXYS-based ride in MY 2021, in the face of the all-new MATRYX based Assault 146.

So maybe you’re wondering why and how the 144 Assault continues to capture the approval of the highly selective SnowTrax and Supertrax crew? FYI, we have both a 144 AXYS Assault 850 and a 146 MATRYX Assault 650 at World HQ this winter.

Here’s the simplest way of explaining why, in the face of formidable competition, including the excellent Ski-Doo BackCountry X-RS and Arctic Cat’s RIOT, the Polaris Assault continues to be our pick for best sled in this class. It’s not about doing one thing well; it’s about doing two things well and minimizing compromises. We’ll explain.

This class is not solely a deep snow, freeriding segment – although the expectation of buyers in this segment is they definitely will be riding off-trail.

Okay, we’re not going to posit a diatribe on the wrongness of off-trail riding. For the sake of this report we’ll assume everyone who rides a X-Over sled only goes off-trail where it’s 100 percent copasetic. Back to the sleds…

Clearly the Switchback Assault 144 850 is a capable boondocker/freerider. The sled, when equipped with a 2-inch Camo-shredder (our favorite shoe for this ride) is exceptionally potent and can, in some situations, run with full-on shorter tracked mountain rides. However, the Assault is not targeted at the vert crowd – it’s positioned precisely as a deep snow flatland and groomed trail ride.

Here’s my point: The Assault always pleases when taken off-trail, however, the G4 based Backcountry XRS Ski-Doo with 850 power is just as capable – arguably more capable – than the Assault off-trail.

So if we just admitted that reality, why do we think the Switchback Assault is the ultimate X-over ride? Simple again. The Assault is a really good trail sled with its IGX uncoupled skid, variable castor IFS and light weight.

Did we mention the Assault’s dual purpose ergonomics? You can ride this sled all day on trails and not feel the least bit strained by excessive body roll, understeer, unrepentant skid-frame ride quality or a too-tall bar riser.

This is where Polaris makes hay with the AXYS Switchback Assault. It’s really good off trail and its really good on trail. Being better at one of these two riding disciplines isn’t what its about.

The class is called Crossover – and that quite simply means a sled of this designation should be able to cross over between two riding disciplines – a dozen times a day if necessary, delivering top performance in both riding genres.

So there you have it: The Polaris Switchback Assault 850 144 is still the king of this hill.