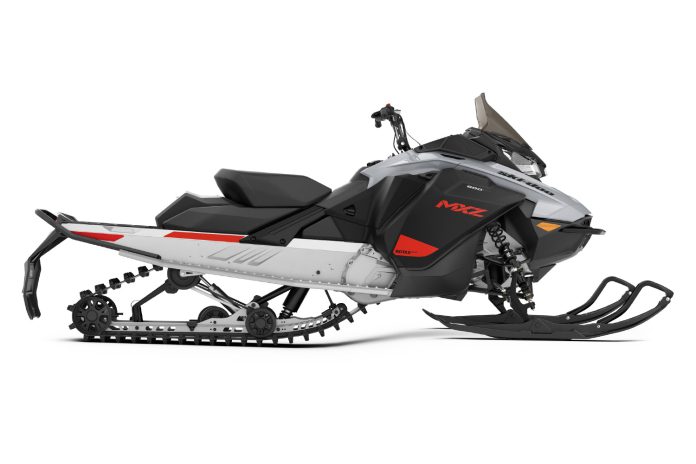 One of our readers recently asked us what the top speed of the new Ski-Doo MX-Z 600 EFI was.

If you read our recent online story describing our riding impressions of this sled you’ll know how impressed we were with its power.

At a claimed 85-hp, the Sport feels much stronger and is really responsive on trails, easily keeping up with other sleds in the 600 class there. However, we never expected it to run with say, a 600 E-TEC flat-out on a frozen lake – and neither should you. This sled’s strongest point is its bottom end and midrange power.

Since we didn’t report what we had recorded as a top speed for the 129-inch Sport EFI, we thought we should go out on the lake and try a few speedo runs with it. Keep in mind we didn’t use radar for our experiment so the initial top speed we recorded is taken from the MX-Z’s speedometer only.

The lake was really packed down for some pretty long stretches up to a mile in length. Holding the throttle to the bars for about a half mile we recorded 154 km/hour on the Ski-Doo speedometer. For our non-metric buds that translates to 96-mph. Even if you account for 10-percent speedometer error (very common), that still becomes about 86-87 mph.

We’d tell you the speedos on sleds could just as well be out the other way, with the speedometer reading slower than the sled is actually going – but that just never happens!

Over the years, all our radar and GPS testing has shown without exception every OEM’s speedometer to be recording speeds higher than actual. It just never goes the other way, although we have found some are within about 98-percent accurate.

Ever being the skeptics, we were curious to see what the true GPS speed of the 600 EFI was. We hooked up the electronics and hit the lake again. First time down the lake the GPS told us the true top speed of the MX-Z 600 EFI was 77 mph. On the next run it was 78 mph.

The difference between the Ski-Doo’s digital speedometer speed and the GPS actual top speed was 18 mph or 29 km/hour. Although you could argue speeds vary the most at the top end of the speedo, this is still a big difference.

The other thing that makes sense is that an 85-hp sled just doesn’t have enough power to push itself to 96 mph. In actual radar and GPS testing we’ve noted that 125-hp sleds usually are panting petty hard to hit the C-note. It takes most of that extra 40-hp to push the sled up close to 100 mph.