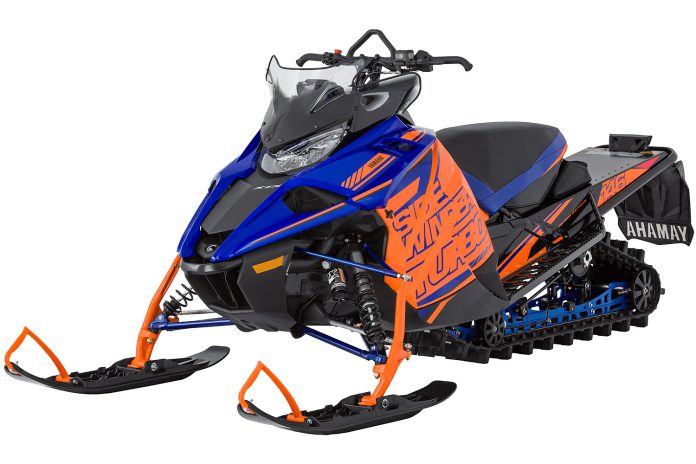 The in-season SideWinder X-TX (SE) is definitely targeted at the hardcore off-trail buyer more than the dual purpose Early Season LE version we discussed in a previous post.

It comes with the full mountain front end including mountain spindles, 40-inch ski-stance and mountain skis.

Like the LE there’s a 5.5-inch handlebar riser but, quite frankly, from a handling and ergonomic perspective, the SE looks and feels more like a short tracked mountain sled than a crossover.

Choosing to use the Mountain front end on the SE rather than the new ARCS setup draws a clear line in the sand that this is a sled for powder and not so much for trails.

Further evidence is the SE uses an out-of-the-crate 2.0-deep Camso track. This lug depth definitely casts a shadow over groomed trail use and pretty much limits the sled to short runs from staging areas to powder playgrounds.

The trouble is, we think this may fall short of what a SideWinder crossover buyer is looking for, given the ratio of what a Yamaha rider may be attempting in terms of 70-30 on-trail, off-trail use with a super powerful, heavier turbo-rocket.

As a playful boondocker, the SE will excel. Its increased traction, low resistance front end and distinctive mountain sled aura will not only perform better than the LE in powder, but it will likely climb with the best of Yamaha’s mountain sleds built before MY2020.

Good news for SE buyers is Yamaha has chosen to stay with the uncoupled Versatrack skid and 3-position-adjustable 1.5 QS-3s up front and on the skid’s rear arm.

We think the new and very re-thought X-TX is definitely worth a good, long look this season.

For our money, we feel the LE is the best choice for crossover use, but the SE is as close to a mountain sled Yamaha offers with SideWinder decals on the hood. It may be perfect for the way you ride.