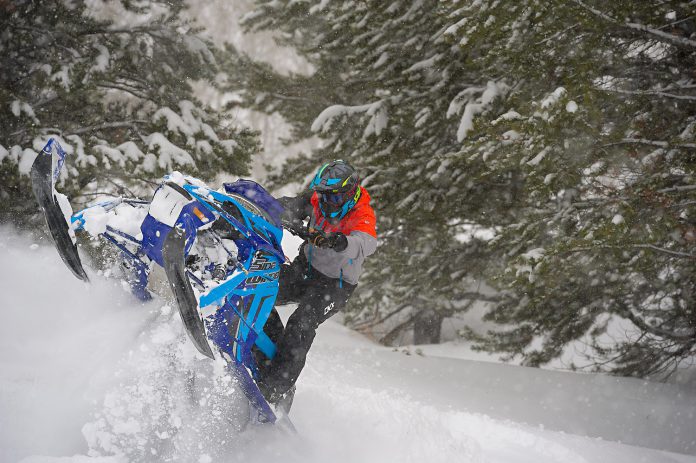 Lightness is rule numero uno when you’re building a powder sled. Sure there’s near unlimited power with the SideWinder but deep-snow handling is always compromised with the heavier power package.

This is the first thing 4-stroke haters will bring up when you attempt to slot a SideWinder into the crossover segment.

However, you can’t deny it; power makes up for a lot of extra mass in the equation – as long as you’ve dialed in the traction and handling packages.

Yes, it takes a skillful rider to master the combo of massive power and extra weight off-trail – but when you pull it off, the results are impressive!

Weight, or maybe better described, flotation, is a prime reason Yamaha has upgraded its long-suffering X-TX from a 141-inch track to a 146 for 2020.

Furthermore, early-season marketing has provided two distinct versions of the X-TX – both of which are completely different from one another.

The early-order-only LE is actually closer to what we would call a true crossover sled than the in-season SE.

The LE offers Yamaha’s new, co-designed-with-Arctic Cat, ARCS (Advanced Roll Center Suspension) up front in combination with a new Versatrack skidframe with a higher front shock mount and a set of QS3 shocks.

The skid has a 1.6-inch deep Cobra wrapped around it – and we think this is a near-perfect blend for trail and off-trail riding – even if the SE does offer a deeper (2.0) track.

The Versatrack skidframe uses conventional design, incorporating two shocks (one front, one rear), torsion springs on the rear arm rather than coilovers, and torque sensing links left and right – but no coupling.

The front end was actually designed with flatland powder and trail use in mind – not so much pure vertical climbing. The spindles are skinny-efficient in deep snow and the higher roll center geometry makes far better use of Yamaha’s Tuner skis on trails and the wider, 6.5-inch Crossover versions on the LE.

The handling improvement cancels Yamaha’s ski deficiencies and turns the sled into a very competitive handler. We cannot describe the difference this makes in riding confidence when you consider how much power is gnawing at your right thumb all the time.

Out back, the uncoupled Versatrack transfers hard and the torque links drive the skid deep down into the powder as long as your thumb is applying throttle.

This is vital to fast climb-out when you’re in powder taking off from a dead stop or about to have an oh-no moment when the only solution is to feed in massive throttle and hang on.

Is 1.6-inches enough track depth to bail you out? We think it is in most cases, but the real benefits are: Less friction from a slightly shallower track and more versatility for groomed trail riding.

This brings up an important consideration: Do off-trail-prone riders buy a SideWinder to 100-percent compete with off-trail 2-strokes?

Honestly, we don’t think so. The weight thing is just too hard to argue against. We think the SideWinder crossover rider rides about 80-percent trail, 20-percent off-trail – at the most, probably 70-30.

If you accept this reality, the X-TX LE is ideally targeted and if you cashed up for one on the spring-buy program, you won’t be sorry.