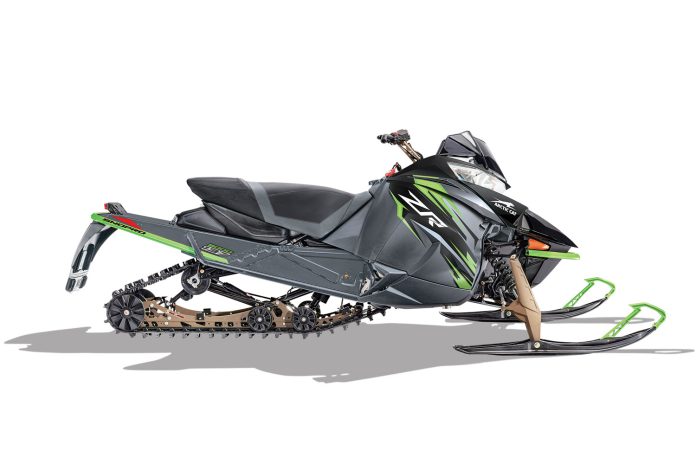 For years, the bread-and butter sled in the Arctic Cat line-up has been the Sno-Pro. This sled variation has been offered with 600 and 800 2-strokes and even some years with a 700cc or a 1049cc 4-stroke triple.

The idea behind the Sno-Pro seems to have always been that it’s a starting point for performance riders. Although its IFP gas shock package has been very good, more sophisticated dampers like FOX QS3s and Kashima coated high performance shocks have been reserved for the more expensive Cats like the RR and Limiteds.

As it is (or was) the Sno-Pro provided a lot of ideal trail riding features inherent with the ProCross chassis and was a versatile, fun ride for the masses. The 137-inch LTX version was especially appealing because of its excellent deep snow manners combined with its trail ability.

This year, it looks like Cat has re-targeted the Sno-Pro as a still-reasonably-priced sled but now one that offers some fairly serious high performance groomed trail capability.

Not only does the 2020 Sno-Pro offer the new ARS II front spindles and geometry but it has adopted the T-Cat and Limited’s lower ride height. The idea here is to lower the sled’s center of gravity and raise its roll center so handling is sharpened to a razor edge.

We can attest to this thinking after spending some hours on last year’s Yamaha SRX and ThunderCat. The idea is to maintain the same amount of travel but calibrate springs so the sled has more ride-in or sag at static position when the rider is seated. There’s also a change to the skid’s slide rail mount for the front arm. It’s now about an inch higher and the front arm sits much flatter at static.

The Thundercat and SRX relied on adjustable-on-the-fly 3-position damping to ensure no bottoming-out in the whoops, but the new Sno-Pro relies on dual rate springs and non-adjustable gas shocks to deliver a flatter, more stable trail riding stance in the corners.

Some of Cat’s marketing refers to the Sno-Pro’s ride as “firm”. This is actually a little misleading as the engineers have told us the shock damping and spring rates are pretty much the same as last year.

The actual spring rates and damping is somewhere between the former LX and the 2018 Sno-Pro except the springs now have the dual stage feature. For the last ten years sled-builders have been working to improve ride quality and offer consumers more and more plushness with more stable cornering. Cat’s intention is to deliver the best of both worlds.

Another clue the Sno-Pro is intended for high speed trail and ditch running is its one-inch deep track. This is definitely a departure as sleds in this class have always offered a minimum 1.25.

Here’s the contradiction: The Sno-Pro has a longer track – presumably for going off-trail – but has a shallow-lugged track which would appear to compromise off-trail performance. Hmm. Seems like a mix-up.

Here’s what we suspect is happening. Because Cat doesn’t offer an 850 (yet) there has probably been some pretty severe navel-gazing about horsepower and top end performance.

Cat has already shown us it has a new version of the 800 C-TEC for 2020 with new cylinders, pistons and rods – making arguably 165 horsepower.

Along with the suspension and track change, just like the T-Cat and SRX, it’s pretty much assured this 800 will pull as hard as the competition’s 850s at top end.

It’ll be up to the consumer to figure out how to get one of these monsters to hook up, though, and buyers will likely decide to stud-up that one-incher after a couple of pulls down Kevlar Lake with the track spinning past the C-note.