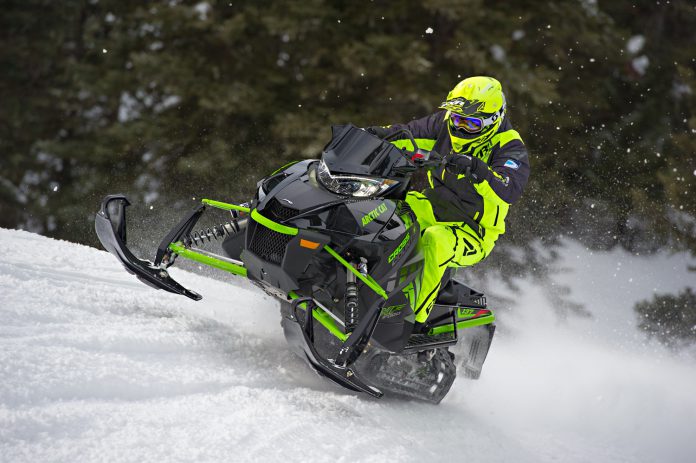 The news this year is all about power. Three of the four OEMs (Arctic Cat, Ski-Doo and Yamaha) have whipped horses in the Maximum Performance category and have done so with a gnat-swatting, grand slam, take-no-prisoners approach unprecedented in the sport.

Topping the power ratings are Yamaha’s turbocharged SideWinder series and Arctic Cat’s Thundercat and associated 9000 models. Not to be outdone, Ski-Doo has rewritten the rules in ultimate performance 2-strokes with a brand new 850 E-TEC in a brand new chassis.

On the other side of the coin, Polaris is staying with its latest 800 but that extreme engine may have been the catalyst that made the other three step up this year.

The turbos are unashamedly claiming 180-hp, but independent testers are telling us these 4-strokes are rated rather conservatively and produce several stallions beyond their claims. Same with Ski-Doo’s new 850.

Official claims are 162-hp, but the “old” 800 professed the same power and believe us, the 850 is way, way faster. The only way you’ll know for sure what kind of power these sleds make is to try one, so if you haven’t already bought one, you might have to beg a ride on one of your buddys’ sleds this winter and nd out for yourself.

None of us should be too surprised the ante has been raised so far upwards in engine performance; it’s pretty much the way it’s always been in snowmobiling. Even going back to the Sixties and early Seventies, the sled-makers were raising the bar on performance every year and by the turn of the millennium top 2-strokes had gone from 600 to 700, 800 and 900ccs and not long after to 1000ccs.

During those years maximum hp ratings stayed close to the 160 or less range but the actual acceleration and top speed performance delivered due to new-age electronics and clutch innovations made those sleds, in all displacements, very, very fast.

Frankly, all-out performance has always been a hallmark of snowmobiling. Certainly not everyone wants, needs or spends to get an ultra-performance sled, but there’s a reason big-inch engines are offered in so many categories: It’s about where the average rider wants to be going with his or her aspirations and expectations for their next purchase.

The “graduation principle” is very real in snowmobiling and has fueled sales for decades.

Example: A consumer starts with a 400 or 500cc sled and five years later they’ve set their hair on fire with a sled pumping out 160 or more ponies. It’s good for business and underscores the platitude: “Build it and they will come!”

Until this year we’d observed a tapering of OEM focus on top-drawer performance. It had pretty much become the rule that big-inch engines top out around the 165-hp range (the exception was Cat’s 1056cc turbo twin) and 2-strokes leveled out at 800ccs, no more, no bigger.

Without question, this had much to do with EPA certification and the high cost of getting any new snowmobile engine approved by the government. Under the current rules, certifying a new engine takes at least a couple of years and usually more.

Even revamping an existing engine into an “HO” version takes a lot of work, money, testing and time before it’s suitable for sale. This is one of the factors that makes 2017 a blockbuster year for this industry.

We can boldly tell you, this performance boom has been in the works for a while and we’re guessing there’s more coming. You can expect more big things from Arctic Cat in the next twelve months and we think Ski-Doo has a tremor-causing 4-stroke to come.

Oh, and Polaris just might start the whole cycle going again, too.

Kent Lester
Kent Lester is Co-Publisher of SUPERTRAX Magazine and a regular contributor to this website.
Previous articleSpring Riding in BC Canada
Next article2017 Polaris 800 Switchback Assault 144