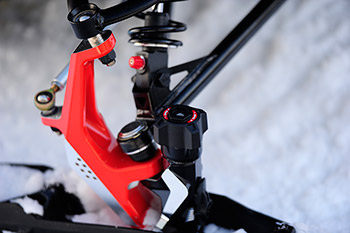 As usual, Ski-Doo has brought a giant fly-swatter to the beehive and has introduced some blockbuster new-tech for MY2016.

Here’s an overview of some of the new additions:

Okay, think of a set of skis with a knob control located just ahead of the spindle that allows you to drop the ski’s “blade” deeper into the snow so you can match different riding conditions.

There’s a dial “gauge” on the ski’s control device so you can tell how deep the sled’s carbide blade is penetrating the surface and you merely twist the knob to adjust handling for ice, hardpacked snow and powder.

This is such a simple, quick method to tune your ride, we can’t imagine why someone didn’t think of it sooner. Incidentally, TS stands for “Tuneable Ski”.

129-inch Tracks For Many MX-Z Models:

This year, all TNTs and MX-Z Sports stay at 120-inches but the early-order X-Series goes to 129 along with the MX-Z XRS.

We sampled these sleds with the slightly longer track length and are glad to report there is no discernible handling compromise but a much better versatility factor as the sled gains more floatation and gets more traction both on-trail and off, not to mention better braking.

Our favorite trail combos are the MX-Z models with the longer track and the new TS adjustable skis.

Intelligent Throttle Control for the 4-TEC:

The same technology has been applied to the 1170 triple and it makes a big difference in operator control.

Formerly, the throttle was edgy on this engine and iTC simply smoothes out the sled’s off-idle throttle tip-in performance so virtually anyone, experienced or non-experienced can enjoy this engine’s power.

This drive-by-wire tech uses Sport, Normal and ECO modes operated at the turn of a switch and the throttle flipper can be turned around backwards on the handlebar so you can use your index finger to pull the trigger.

BTW: We tested this set-up in ECO and found the sled was still surprisingly fast, although throttle engagement was much softer than Sport or Normal mode.

146-inches for Renegade Backcountry and X:

Ski-Doo’s most serious off-trail targeted crossover, the 2016 Backcountry, gets a 146-inch uncoupled tMotion skid and choices of 16-wide Cobra meat (1.6) or a PowderMax (2.0).

These sleds use the mountain-targeted FlexEdge track but keep their trail-oriented wider ski-stance.

All Grand Touring models (and any sled that formerly used the XR bodywork) will use the XS based body shell with newly-styled side panels and a much slimmer, more aerodynamic look.

The Grand Touring also receives the RAS 2 front end upgrade and the SE will come with Pilot TS adjustable skis and iTC on its 4-TEC powerplant.