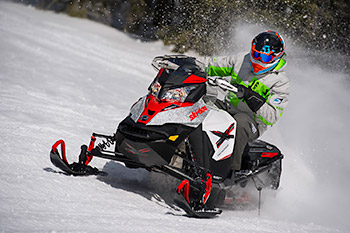 We put 90-miles on a production 2016 Renegade with the revisited 1170cc 4-stroke last week. If you hadn’t heard, Ski-Doo went with its drive-by-wire technology on this engine this year, expanding it from the ACE 600 and 900 engines.

This setup gives you three different riding modes, depending on the trails you’re riding and whether you prioritize mileage over performance.

This is a fantastic engine in the upper ranges and its largest-in the-industry 1170 cubes of displacement generates enormous torque when that crank is spinning. It feels like a hypersled.

Throttle tip-in from idle and low speeds is very smooth now with DBW and Ski-Doo has pretty much beaten-up the throttle lag problem of the past. Throttle effort at the thumb flipper is extremely light.

Truthfully, we’d prefer a bit more throttle spring – it’s almost too light and when your one-handing it to adjust your goggles or give signals you have to be careful the sled doesn’t lurch from a sudden off-balance application of throttle.

In powder we noticed the typical riding demeanor you get with a 4-stroke sled. It feels noticeably heavier than an E-TEC and when you get it off its line or out of a groove set by the sled ahead of you it wants to “pendulum” itself in its own chosen direction.

This requires some preplanning and throttle control because the sled will understeer in fluffy snow. On hard packed snow this tendency is much less and the weight of the heavier engine works to the rider’s advantage.

We also found the adjustable skis work great. We had to do some road running with marginal snow left on the pavement and found a “sweet spot” we could adjust in where the skis were floating on top without grinding the carbides on the pavement (be careful not to retract the skags too much or you’ll grind the bottom of your skis off).

No complaints with handling or suspension with the X. This is a fully evolved chassis and Ski-Doo has done a great job with it. It feels nimble and lighter than the other 4-stroke we had on this ride, a Cat 137-inch Limited, but we’re not completely sure which one is fastest because both sleds had really low mileage on their odometers.

Overall, we felt the Cat was a bit more engaged with the trail than this particular Rennie but both are a pleasure to ride.