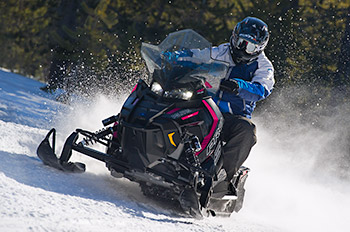 Sometimes things go on with sleds that are mostly unexplainable.

Something of this order occurred at SnowShoot last month in West Yellowstone, Montana.

In the Polaris pits a special graphic edition 2016 AXYS RUSH 800 was on display and available for us to ride. The graphic rendition was clearly in support of the Pink Ribbon Riders charity organization and thus the sled was trimmed in, cough, pink!

For sure, what I’ve just disclosed has nothing, zip, zero to do with what I’m about to expound. It seems this limited-build (actually a prototype MY 2016) AXYS came into existence through a confluence of perfect assembly, perfect machining, just right torque values on nuts and bolts and a Liberty 800 HO that had all the stars line up the day it was built.

The engine was eerily smooth off idle and responded to flipper massaging with a tach warping, arm stretching surge that made everyone who rode it sit up and pay attention.

Mike Hedlund, one of Polaris’s chief AXYS engineers, legitimate heir to the Hedlund dynasty and all around nice guy pointed me at the pink RUSH and let me know it was the hands down fastest 800 HO at Snow Shoot.

I asked him “How fast?” He responded in that Roseau check-my-pulse-to-see-if-I’m-alive” tone, “Go try it”. So I did.

After a brisk run out to South Plateau with the loud handle turned all the way up, I and everyone else on the Supertrax/Snowtrax team came away shaking our heads and laughing at the pink RUSH. It was in fact, stupid fast.

In response to this report your question should be: “Why”? According to Mike and everyone else at Polaris, that is either a secret or simply unanswerable.