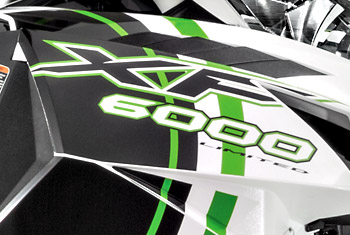 Arctic Cat’s 6000 engine rung the bell last year for some very easy to articulate reasons and it seems those feelings remain.

My first pull last weekend on a fresh-out-of-the-box XF 6000 Limited did nothing but verify how strong this amazing powerplant is.

Considering the DSI 600 has a break-in clock and we didn’t get enough time (about 130kms) to shut off the clock, the 6000 pulled just as hard as last year’s and delivered it’s thrust in the same seamless way we grew to love last season.

The XF platform (new for the 600 in 2015) was my fave AC chassis last year. Not coincidentally, the XF 137 platform became AC’s biggest selling chassis (with all engines) in its intro year.

Part of the reason it worked its way into our hearts was tied to Arctic Cat sending us a 2015 spec rear arm damper this past February. From the moment we bolted the shock into an XF 8000 Sno Pro, every rider – without exception – commented on how it improved ride quality on the sled.

The new 2015 XF 6000 comes with the identical spec shock we sampled. Could the Slide Action skid be better? Yes, the torsion springs need about a 30 percent drop in rate so the two higher preload settings can be used. As of right now I would love to see the individual requiring medium or high on the torsion spring snap block!

The XF with a 600 responds to a lightweight and powerful mill like the 129 El Tigre did last year. Turn-in is light, predictable and confidence inspiring while the on-center feel of the Pro Cross chassis is incomparable. This sled is so steady at speed you can literally one hand-it at 60 mph. It seems the traits desirable on last season’s 800 XF are even more so on the XF 6000 this year.

Arctic’s new-last-year gauge cluster is an exceptionally useful device reporting a plethora of information and allowing the rider to position info where he or she may want it.

Hat’s off to AC for the excellent ergos as well. The puffy seat and just-right bar riser along with a barely acceptable height windshield make all day rides super comfy and stand-up to sitting transitions are easy.

The XF’s 137 X 1.25 footprint is highly effective in loose snow – something we experienced last week on our first ride. The mogul bridging effect of the longer rails makes the XF the best riding sled in the AC stable. We have one gripe though – the Floats up front are either too stiff or too saggy.

If you can find an unsold XF 6000 you’ll probably pay dearly for it. This is a really good snowmobile that will prove itself to a ton of non-Arctic Cat owners this winter.

Mark Lester
Mark Lester is Co-Publisher of SUPERTRAX Magazine and a regular Host on SNOWTRAX TV.
Previous articleSnowmobile Safety is a Must
Next articleOUT OF THE WOODS