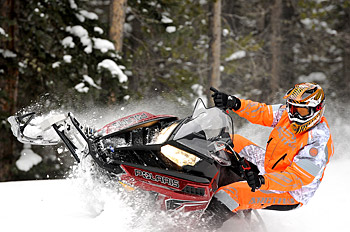 This is the time of year we start to stick our necks out and make some educated guesses about the new sleds coming next year.

It’s hard to believe, but by the end of January we pretty well know what you’ll be shopping showrooms for next season.

Of course we can’t inform the public of details on the new stuff until the manufacturer’s embargo dates have passed and that’s usually sometime in March.

However, before we’ve attended the January OEM “Sneak Peeks” it’s open game on all the assumptions and best stab guesses we can think up.

You’ll be reading our estimations on all four manufacturers’ 2013 models over the next week or so, but here are a few we think might rise out of the Polaris camp.

This one’s a no-brainer: Polaris introduced a red-hot 2-injector 600SDI Cleanfire engine for the mountain market last season and we’re sure this engine is destined to inhabit all Pro-Ride Polarii for the 2013 model year.

We’ve experienced the kind of power this motor makes and its personality is so much like a 700 some of our riders thought it was actually a 700 “ringer” engine with 600 labels.

Not so, we think this mill will set a new standard for performance in the 600 2-stroke class, beginning this season.

How about a new Pro-Ride front clip with a conventional 121-inch in-tunnel skid to replace the expensive-to-manufacture IQ chassis for the Shift?

This sled would weigh a lot less; take full advantage of the more recent glued-together platform technology and 2012 revision of the non-parallel A-arm front end on the RUSH.

With a conventional skidframe, this would make a pretty cool competitor to both the new Cats and Ski-Doo’s various iterations of the XP while maintaining the RUSH’s separate, unique cachet as a performance model.

Think Polaris will offer an 800 Adventure? We do.

What about 4-strokes? If Polaris is gradually phasing out the IQ platform, then current one and 2-up cruiser style sleds will likely be phased out too and replaced with lighter, modified Pro-Ride tourers with the 4-stroke turbo adapted in place.

We think these cruisers will continue using skidframe-in-tunnel rear suspensions. An alternative would be a 2-up Adventure utilizing a new 600 2-stroke. That one makes sense, too.

Here’s a couple of things we think won’t be changing: We’d be disappointed if Polaris terminated it’s semi-direct injected 800 after what we’ve experienced with it this year.

It’s definitely one of the best 2-strokes in the biz and it would be tough to duplicate its durability, power and efficiency, even with a new DI engine. Same goes with the new 2-injector 600.

This is an absolute stab, but we wonder if Polaris may have a super-efficient 4-stroke in the wings waiting to replace the soon-to-be-terminated 550 fan.

We’d guess this motor would up the stakes to about 70 hp to make it a bit more appealing and worth the higher price to buy an entry level 4-stroke over a 550 fan.

Staff Report
Previous articleHow Do I Adjust The New Polaris Rear Suspension?
Next articleVOTE FOR A CHAMPION