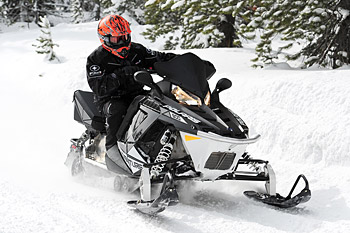 The rest of the Polaris fleet receives detail refinements for MY 2013 including a move to two injectors from four on virtually all 600 Cleanfire SDI mills. The only holdout will be the Touring 600.

This is a great move with multiple benefits. We love the way the engine responds off idle and above engagement. It feels more torquey and is definitely cleaner running, evidenced by better EPA numbers for the twin injector version.

Here’s one that’ll bring tears to your eyes: For almost all 2013 Polaris sleds receive integrated handlebar hooks as a result of a new 2-piece throttle block. Heaters will now run right to the bar ends. Ahh, like maybe that was overdue?

Polaris has a new ski for 2012 and in a way only Polaris can deliver, it’s classically understated. From the top side it doesn’t look different but it works very differently.

The new ski profile is parabolic at the front of the keel while using no “outrigger” keels like Ski-Doo’s Pilot 5.7.

Polaris is endorsing the Switchback Adventure concept with a full-on 2013 Liberty Cleanfire powered 800.

We think Polaris got somewhere in 2012 with the 600 Adventure and the product planners know they’re onto something.

Obviously the arrival of Arctic Cat’s 2013 Cross Tour adds fuel to this fire. The only element missing from the Adventure package is a clip-on passenger seat, something Cat saw as an opportunity right away.

Switchback sales were excellent last year and the morphing of touring sleds into the “adventure” genre appears to be a verifiable trend.