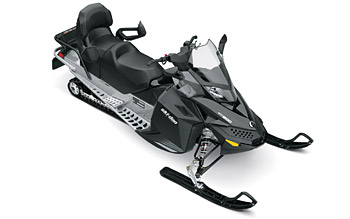 If you choose the Grand Touring Sport with a 550 fan-cooled 2-stroke, you can immediately check the model lists from Arctic Cat and Polaris and find sleds offering the same features.

However, Ski-Doo’s Grand Touring Sport equipped with a carbureted 600 Rotax 2-stroke is a completely different creature.

Fact is, there just aren’t any carbureted 2-strokes being built any more with liquid cooled 600cc engines, exhaust valves and 100-plus-hp outputs.

Obviously, Ski-Doo sells enough of these sleds to continue offering them. There’s good reason why. There just isn’t another 2-up tourer that offers this combination of performance, ride quality and chassis sophistication at this price.

Since ride is the single most important facet of a 2-upper, we just want to let you know we’ve ridden this sled and it is without question one of the best suspended snowmobiles we’ve sampled – and that includes single passenger and 2-passenger rides.

Its SC-5 rear suspension equipped with gas cell shocks is especially plush – and not in a wimpy way, either.

This skidframe handles chatters so well you don’t even know you’re riding over them and its ability to save the rider pain in deeper stuff at trail speeds is flat-out incredible.

If we were riding a sled a hundred miles a day on trails where the groomers have been absent, this is the sled we’d want to be riding.

Since the Touring Sport is built on Ski-Doo’s super-lightweight XP platform, you’re getting some of the most sophisticated chassis technology available.

This sophistication comes home with a 2-up sled that handles precisely, resists darting and adapts to 2-passenger configuration without any negative effect.

Except for its engine, shock package and a number of expensive gizmos this is the same sled as the upscale SE, so it’s in very good company tech-wise.

The carbureted 600 twin under the hood is a consistently strong performing engine that melds beautifully with the Sport to generate sufficient power for 2-passenger riding and although it won’t deliver the incredible gasoline and oil mileage the E-TEC 600 does, it’s a relatively low-smoke engine making horsepower in the 110-hp range.

This is ideal performance for serious 2-up travelers and the $2500.00 you’ll be saving on the initial purchase (compared to the 600 E-TEC LE) will buy a lot of in-season petroleum.