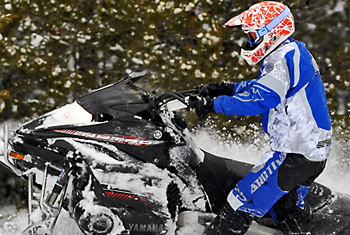 For those you who are skeptical about 4-stroke mountain sleds, you need to hitch a ride on Yamaha’s 2012 Nytro MTX with the factory authorized turbo kit on it.

This is indeed a wild pony of an ilk the industry has not experienced before.

Our crew tested the turbocharged sled in Montana last month and came away raving about the power. According to one rider, the T-N-T (Turbo-Nytro-Terror, as we call it) kicks like a mule when the boost hits and doesn’t lose an ounce of power all the way over the top.

The turbocharger is mounted under the seat and it actually inhales at the rear of the sled close to where the former exhaust used to exit.

The exhaust now comes out at the front of the track – this positioning is a complete departure for Yamaha 4-strokes and our crew told us the thing not only performs like a rocket ship but flat-out looks rude, too.

This very extreme and completely off-the-wall kit transforms the already potent 130-plus horsepower 1049cc Nytro triple into a cannon.

Yamaha conservatively claims there’s over 180 ponies on tap, but frankly, our riders came away raving about the power and chuckled at Yamaha’s low-ball rating.

Our guys felt this was an incredible ride for the mountain enthusiast who is interested in launching straight up and reaching new climbing heights.

Although some of the competition’s 2-strokes offer more weight reduction, for pure evil grunt and climbing power, this one is super-tough to beat.

Combined with Yamaha’s new track tech and the other refinements offered on the MTX, the Turbo package makes a lot of sense.

Here’s what’s really nuts. Yamaha is offering the Turbo upgrade for only $1,500.00. That price is available on the company’s Spring Power Surge early-order program only and constitutes a saving of more than half the price the aftermarket charges for the same thing. That’s just a crazy-good deal!

Get more info at: www.yamaha-motor.com