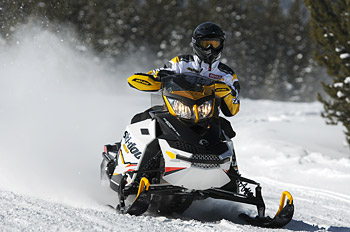 How can you deny the superiority of a snowmobile that leads the industry in lightness, fuel efficiency and EPA hygiene?

Even if this wasn’t the fastest sled in its class (it’s too close to call), on any given day it will pass or give the 600 RUSH and any other 125 to 130-horse sled a serious run for its money.

When you stir in Ski-Doo’s new r-Motion skidframe – a suspension that will eventually be replacing one of the best riding setups in the business, SC-5, you have an unbeatable combo. Even with SC-5, I’d still rate this 600 Best in Class.

Wanna talk reliability? You know as well as I do we’ve had five seasons with this amazing mill and it’s been bulletproof.

Maybe you’ve forgotten those rides where we saddled up and rode 150 miles, parked the E-TEC for the night and next morning topped up the gas tank, added about two squirts of injector oil, then rode another trouble-free150.

This 600 is an anvil, a tugboat, a piece of granite when it comes to reliability.

Lightness? The XP chassis is so light you practically have to rope it down to the ground when you park it so it won’t blow away. The competition has had years- years, Mark, to match this platform’s mass. Hasn’t happened and lightness is what makes this sled work so well.

This is the Trail Power winner because it excels in every area. Not even worth talking about!

Kent, I think you’re beginning to understand how close this BIC award category has become. Thank you for disclosing the pop-can rigidity of the XP’s lower rear A-arm mount. It’s one of few concerns I have with your selection of the MX-Z 600X rMOTION.

I believe the BIC needs to be about more than just a new suspension or an engine. In the case of the Pro-R Rush, it’s BIC nomination revolves around telepathic handling, surgically precise turn-in and gentle, predictable inside ski-lift at the edge of adhesion.

Polaris has re-invented the RUSH’s IFS for 2012 and I have to say I’m shocked. The sled already set the bar high for handling prowess, yet this lighter and simpler variant is the best handling front end every screwed onto a sled.

I didn’t expect you’d discern this substantial improvement in handling. You rarely pull more than .01 Gs on a “brisk” trail ride.

It isn’t fair to discount the Cleanfire 600 in comparison to the E-TEC 600. The CFI 600 Liberty is EPA sanitary, immensely torquey at engagement and will pull the Pro-R’s skis off white top whenever you whack it.

Kent, it might be time for a tie in the BIC Award protocol.