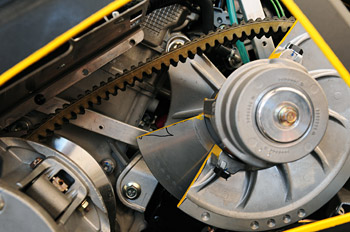 Sometimes, the best ideas are the ones that just make you slap your face and say: “Why didn’t anybody think of that before?” It’s that way with Cat’s new Torque Control Link.

Here’s what’s so cool about TCL: While a snowmobile engine is spooling up RPM, it moves on its rubber mounts considerably. This means the distance between the primary clutch and the secondary is not constant at different levels of acceleration. This deflection is hard on belts and produces a rubbery, inconsistent “wind-up” that robs power.

With TCL, by creating a solid, unmovable link between the engine, the secondary clutch and the jackshaft, all the torque motion is transferred into the chain case and drive system.

TCL still allows the engine to be rubber mounted to reduce vibes but there’s a floating bearing on the chain case side of the jackshaft to deal with the movement of the engine and jackshaft.

Since everything stays constant on the PTO side, belt deflection is always the same. This is such a simple idea it took a genius to figure it out.

Roger Skime and his team dreamed this up and the idea could be as revolutionary to the snowmobile industry as the slide rail suspension. Yeah, guess who thought that one up, too.

This was a tricky category. I frankly was torn between these two breakthroughs myself. Each one has significant merit. However, I think building an in-tunnel suspension system operating on a full rising rate ratio at the shock is pretty doggone impressive.

This skid raises the bar significantly providing the best all round, no compromise, lightweight ride ever recorded by this particular editor.

What is very strange here is how the rMotion completely collapses into the tunnel, actually allowing the running boards to come within millimeters of white top.

Thus, the XP’s remarkable low CG handling is completely unaffected while ride compliance rises to an as yet unavailable level of plush.

Here’s where the rMotion aces this category: Its remote, running board mounted preload and compression clickers.

Using a tiny, stubby hydraulic cylinder and a running board mounted threaded pump allows riders to adjust preload to suit both weight and trail conditions in the blink of an eye. That’s bonafide revolutionary in my books.

Okay, I get Arctic Cat’s TCL is important, however rMotion is more important in the real world of moguls and washboard.