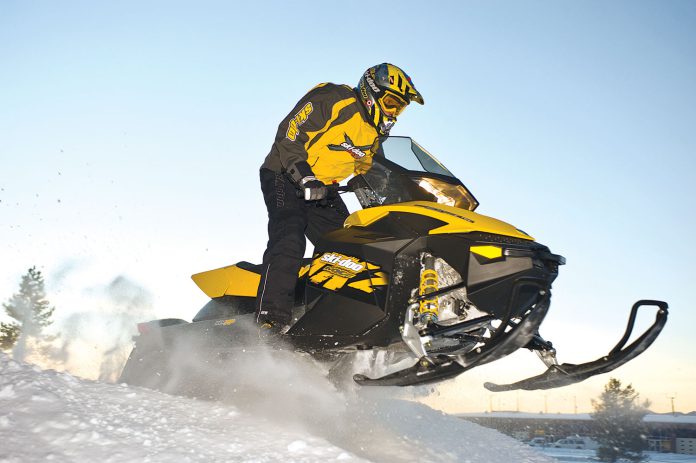 The XP-based Ski-Doo platform was a sales success from day-one and when the E-TEC 600 was stirred-in in 2009, it upped the ante considerably.

2009 was significant because Ski-Doo also refined the chassis a bit compared to its late intro the year before and the ride (SC-5 coupled) and handling were improved.

In this transition year some Renegade and MX-Zs still offered the 600 carb engine still available today. These are a good used buy, too, although far less techie.

The early super-light XP chassis exhibited some strength issues and was subsequently beefed up for better reliability in the ensuing years. There may be recalls and you should check.

One major chassis problem was the XP and XR front bulkheads bending or distorting in situations where there was frontal impact at the skis or spindles.

This was expensive damage to repair and you need to take a measuring tape with you to ensure the left and right skis line up properly on the used one you’re shopping.

The 600 E-TEC has a much better reliability record than the 800 E-TEC and that’s why we recommend you stick with the 600 in a sled this age.

However, Ski-Doo used an ultra thin-carcass track on all XR and XPs in order to save weight and these original tracks are notorious for stud pull-through. Check the condition of the track carefully on one in the 8-10K range, even if it hasn’t been studded.

We’ve heard of a few 600 bottom end failures – usually due to the failure of the IsoTech grease used in the sealed crank bearings. However, it’s not uncommon to hear of 600s with over 10,000 miles on them still running strong.

A word of caution, though: Unless the owner has already done it, we recommend a complete engine overhaul on a used one with miles in that range – no matter how good it runs. You’ll be safest buying one in the 5K to 8K range.