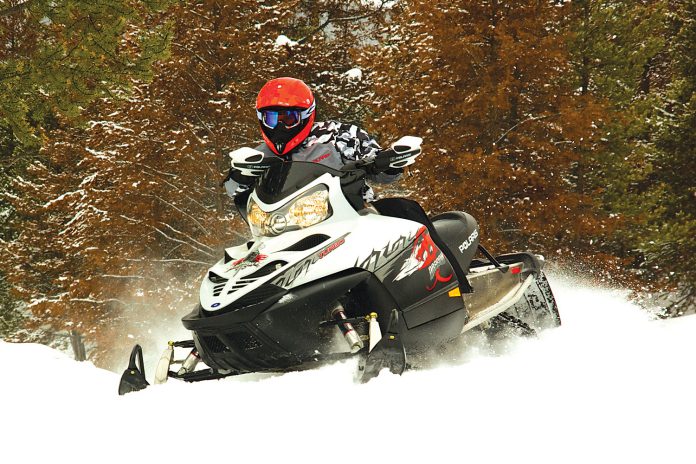 This choice will cause some eyebrow raising because the earliest ones had recalls dealing with reverse gear issues and start-up (an ECU reflash in 2007 fixed this). However, by 2009 the FST had become a reliable, enjoyable sled to own.

The Polaris IQ platform features non-parallel, unequal length A-arms up front and is a great handler, but the extra weight of the 4-stroke makes steering effort fairly heavy if you use too much carbide on the skis.

The original FST was intended to make 135-hp but the Polaris engineers added an “over-boost cycle” to the ECU that increased the boost to take the FST from 135-hp up to 160-hp for about 5-seconds under full throttle. Fun.

Used sled shoppers will be getting benefit from a plush, fully coupled suspension, efficient Polaris clutching and a decent reliability record (after the recalls). These sleds were fast and accelerated very hard despite being heavy and almost bulky looking.

One common complaint from the Supertrax gang was the exhaust sound the FST made. It’s even firing parallel twin Weber engine sounded like an irrigation pump or something else industrial. Some of us, however, liked the fact it added to this sled’s “sleeper” image and made its strong performance all that more mysterious.

We recommend shopping for one with less than 5,000 miles on it or one that has had a clutch rebuild and all the recalls performed, just to avoid any long-term reliability issues.

The resale on these sleds isn’t quite as strong as the 4-stroke Ski-Doo or Yamahas so you might score a super deal on a good one.

Supertrax Onlinehttps://www.supertraxmag.com
Check back frequently for new content and follow us on social media!
Previous articleAll You Need to Know About Polaris’ Patriot 850 Engine
Next article2019 2-Stroke 600-Class Shootout: Ski-Doo VS Arctic Cat VS Polaris