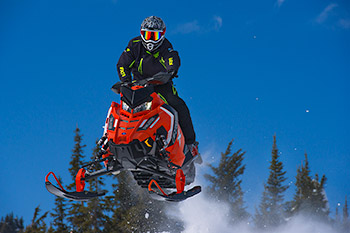 Seems there’s been a lot of talk on this site about 4-strokes and how great they are.

Okay, 4-strokes have their place and are selling well from the OEM’s who offer them. I want to clarify a couple things which continue to make the modern 2-stroke the choice for snowmobile power. Yeah, that’s right, I said “the choice”.

The closest you’re going to get when comparing the weight of 2-strokes and 4-strokes is about 60 pounds.

In the most popular engine class in the biz this measurement holds true. A 125-hp class 4-stroke compared to a 125-hp class 2-stroke is 60 pounds heavier. Sixty pounds right over your skis. On your carbides. In your wrists when you saw the bars. On the front suspension when you ditch bang. Rolling to the outside in every corner when you shred a trail. Did somebody say you can’t feel the diff between a 2-stroke and a 4-stroke when riding trails. Really? I can.

If there’s any comparison that should tilt the scales in favor of 4-strokes you would think fuel economy would be it, wouldn’t you? Don’t look here for a clear victory for 4-stroke snowmobiles.

Consistently the best fuel economy in the 120-130-hp segment comes from the Ski-Doo Rotax E-TEC 600 engine followed by Arctic Cat’s C-TEC 600. Since 2009 when E-TEC first arrived we’ve been unable to better the E-TEC 600’s fuel economy. Moreover, its superiority is not incremental.

The 600 E-TEC regularly cards over 20-mpg in comparable nose-to-tail, all-day rides. A 600 E-TEC can get as much as 25-percent better mpg than a comparable HP 4-stroke.

Don’t come back with, “Oh yeah! The 900 ACE gets better fuel economy than a 600 E-TEC.” Yes, it does. However it delivers at least 30 horsepower less than the E-TEC. That’s 25-percent less power.

Try this instead: Compare the fuel economy of Ski-Doo’s 1170 4-TEC rated at 130-hp and you’ll see the 600 E-TEC is consistently more efficient. In defense of 4-strokes – on average, across the entire fleet of 4-stroke engines offered in MY 2016 – average mpg would be higher than the entire 2-stroke fleet.

We get lots of comments from 4-stroke readers who enjoy not carrying injector oil when they tour. Agreed. However, few readers claim their 4-stroke is definitively cheaper to maintain than a 2-stroke.

We can talk about E-TEC again but we’ll use Polaris as an example instead. Polaris Cleanfire 600 and 800 HO engines are oil miserly and run with very little smoke – only on initial cold start-up. The issue here is the amount of oil and the cost of a 4-stroke oil filter and oil change.

The necessity to seasonally (at least) dump your 4-stroke oil and change the filter brings this comparison into focus. Oil ain’t cheap and neither are filters.

This is a significant cost and if you choose, as many 4-stroke owners do, to have the oil and filter changed by a dealer, you’re looking at spending upwards of 150 clams.

This needs to be balanced against the total cost of injector oil used in a 2-stroke each season.

One more thing: Many 4-stroke sled engines require valve lash adjustments at pre-determined service intervals. Check with your dealer on the cost of this service. Think about sitting down before you ask.

ARE 4-STROKES THE FUTURE?

4-strokes are without a doubt in the sno-mo-future. As technology continues to improve and lighter, higher output 4-strokes emerge 4-stroke snowmobiles will continue to proliferate. However, 4-strokes are not solely the future of snowmobiling. There’s beaucoup legs left in today’s EPA clean, fuel efficient, lightweight and low maintenance 2-strokes.