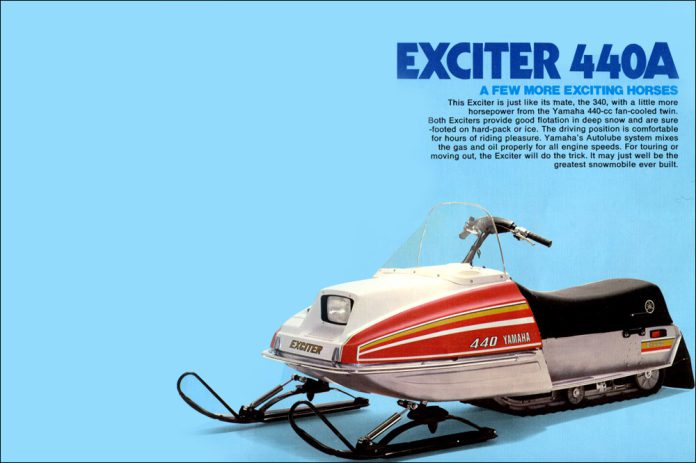 We ran that sled three years and never got caught, but in 1974, Joe sold the sled to a guy who promptly seized the engine, bored it 10-thou over and went one oversize. Needless to say, the piston was a little sloppy.

Joe played it coy with denial. Anyway, the guy got the correct piston in it and kept racing it as a GP 396. You kind of have to laugh about it now as, just like in NASCAR back then, there was a lot of cheating in those early days of snowmobile oval racing.

In 1976, I bought a 1974 GPX 338 but that molded rubber, cleated track was not one of Yamaha’s better innovations. When those cleats started rattling out the back end at 75 mph, it ripped and twisted out the tunnel if the track derailed. I came out unscathed, but sled’s aluminum tunnel was bent and ripped to doll rags.

When I first started attending Minnesota’s Hay Days Grass Drags in the mid-nineties I was on the lookout for a Yamaha 440 Exciter. I found several contenders, but their aluminum belly pans and bumpers were either twisted, bent, stretched or all three.

I ended up buying a 1973 GP 292 with 765 original miles. My first thought was to race vintage ovals with it, but when I got it home and cleaned it up, I realized it was just too nice to race so I just drove it around at vintage events all winter looking like a true Yamaha collector.

A few years back I found a 440 Exciter for sale in the vintage tent at Hay Days and it looked to be in above average condition. Unfortunately, I had no room in the trailer to bring it home and not enough cash with me so I had to walk away from that deal.

That winter I went to the Waconia Ride-In event in Waconia, Minnesota and there was that very same Exciter I walked away from at Hay Days. A few moments later I was the proud owner of a 1977 440 Exciter.

As it turned out, the sled needed a piston and rings, a carb rebuild and a carb intake boot. It took three years, but the folks at Hudon’s Salvage in Barneveld, New York, tracked down an original OEM intake boot for that hateful Keihin carb.

I put more time into this project than I intended, but it was a good runner and I may have put 150 miles on the sled. Do I still own it? Nope! I met a guy looking for a 1973 292 GP to complete his collection of 1973 Yamaha sleds and he bought my Exciter and all the Yamaha parts I had collected.