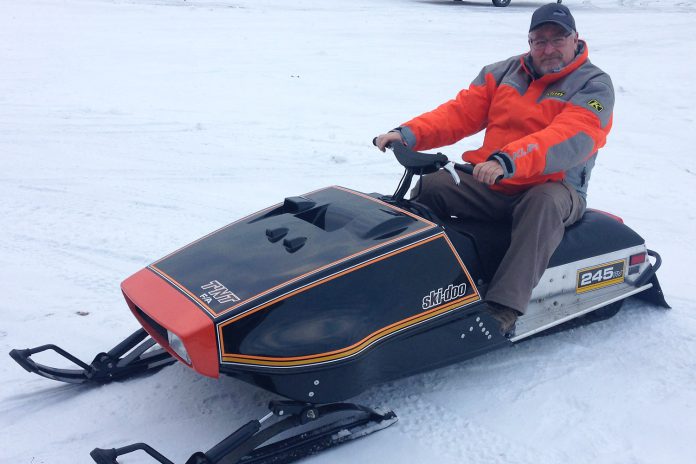 In 1962 I had my first ride on a Husky snowmobile at my buddy Richard Hiley’s 6th Birthday. Now 55 years later I’m still riding with as much enthusiasm as I did those many years ago.

I can’t even begin to guess how many sleds I’ve owned over the years, but I can tell you that every dollar spent was worth it.

Most often, we rode and repaired our sleds from Monday to Friday (mostly fiberglass repairs, which I became very adept at) and raced them on the oval track on the weekend.

Back in those days we bought and sold sleds with regularity. Did I have a few stinkers? Sure I did and I didn’t keep them very long.

To me this was a sled I could run in A & B stock and be competitive as it was a light sled at 340-pounds, low to the ground, stable, wide ski stance, dual Mikunis, tuned exhaust and it was just a cool looking snowmobile.

It didn’t take me long to figure out why the seller was itching to unload it as this sled drove me nuts. In the hands of Pro Racers the RV did decently well, but I was certainly no Pro Racer.

Every weekend I was right in the mix in the first couple of heats of the day, but every heat the sled got slower and slower. We tried everything and couldn’t figure it out. We jetted, we clutched, and we packed snow around the Y-pipe and cylinders and heads. You name it we tried it. If, I made the finals – and I didn’t make many that year, I usually watched everyone take the checkered flag while I finished last.

I sold that sled that fall and for the life of me I cannot remember what I traded or sold it for, but I was happy to get rid of it. It was without a doubt the most frustrating sled I ever owned and would not be missed.

Several years later I was in a buddy’s race trailer and he was lapping the rotary valve out of his 250 MotoSki mod motor. Intrigued I asked why and he just smiled and replied, “When the engine gets hot the aluminum engine block and rotary valve case expands causing friction with steel rotary valve.”

Can’t say I saw that one coming, but looking back, I’m sure my buddy Dave had the answer to my frustrations. You live and learn I guess…some lessons later than others.

As the saying goes, It is what, it is.