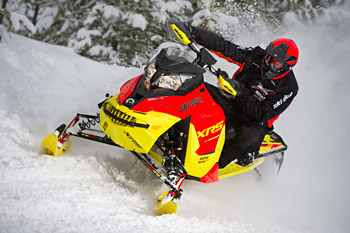 We’ve had a few readers say it’s a shame Ski-Doo dropped the 16-wide track on the Renegade this year. Why’d they do it?

Although we were big fans of the 16 track, too, we think it was a pretty good move going to a 15-wide on the 2015 XRS, X-Series and Adrenaline Renegades.

Here’s why: Along with the front end changes to the new RAS A-arms and spindles to get the MX-Z and Renegade to handle better and dart less, the 15-inch width really helps with the initial turn-in on hardpack. There’s now way less resistance at the handlebars.

Yes, that’s only a benefit for riders using the Rennie for a trail sled but, wow, is it ever a significant one.

By the way, the sled still works really well in powder – as a result of its lightness (the 15-incher is lighter than a 16, too) and you can still opt for a Backcountry or Backcountry X if you want the wider track.

Kent Lester
Kent Lester is Co-Publisher of SUPERTRAX Magazine and a regular contributor to this website.
Previous articleTEST RIDE: 2014 Ski-Doo 1200 MXZ TNT
Next articleWILL THERE BE A 600HO RUSH AXYS?