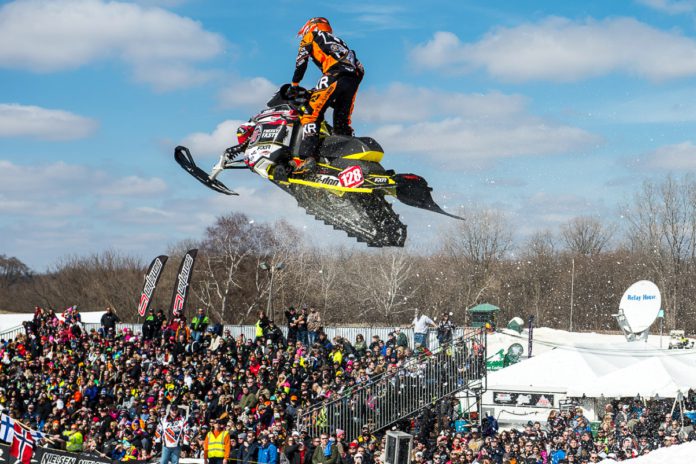 In a flurry of racing activity, Ski-Doo racers took five National Snocross Championships at the ISOC season finale in Lake Geneva, Wis. this weekend. Aki Pihlaja led the way in the Pro Lite class, with championships clinched by Hunter Patenaude in Sport, Kurt Bauerly in Pro-Am +30 and Jordan Lebel in Junior 10-13 and Transition 8-12.

Racing at the renowned Grand Geneva Resort always provides some great action and a few surprises, but Pihlaja and Patenaude made sure to leave their marks by winning their final races of the year in dominating fashion. Bauerly and Lebel were consistently and in the hunt with each hitting the podium to cement their points championships. Surprise came for Tim Tremblay as he suffered a mechanical issue on Friday while leading the Pro Open final with two laps to go, losing a sizable points lead he couldn’t overcome the rest of the weekend. It was Tremblay’s the third runner-up finish in season points in as many years for the 2012 champion.

In Pro Open action, Lincoln Lemieux wrapped up the year strongly by never finishing less than fourth on the weekend; Elias Ishoel collected a podium and Adam Renheim placed 4th in one final.

Pihlaja had everyone’s attention in Pro Lite, but Max Taillefer made his presence felt by running strong both days and finishing second in the weekend’s first final.

Hunter Patenaude wanted to leave little doubt about who was going to be champion in the always rough-and-tumble Sport class and did so by winning both finals at Lake Geneva in dominating fashion. Fellow X-Team racer Camryn Anderson was in the mix for most of the year and finished third in the overall points race.

Danny Poirier made the last weekend of full-time racing in his career worthwhile by winning one of the Pro AM +30 finals and qualifying for both Pro Lite races. Paul Bauerly collected the other Pro AM +30 checkered flag – right in front of his brother Kurt, who won the championship. (A little reminder there’s always next year..)