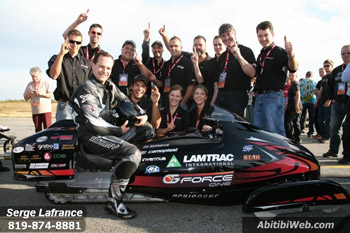 Unable to convince Bonneville Salt Flats authorities to participate in one of their speed events with their snowmobile this past fall, but not giving up they attempted to break the record in Quebec.

September 27th marked a new world record at the international airport in Val-D’or. At the very first attempt, driver Francis Morin directed the G-Force-One down the strip and across the markers to achieve a clock reading of 210.28 mph, 338 kph.

ISR (International Snowmobile Racing) and SCM (Super Compétition Motorisée ) officials were present to confirm the speed record with the chronometer and land markers at mid track.

They also assisted in the removal of the head of the engine to confirm that is was in fact a 1000cc engine.

The main goal of “Lamtrac G-force” is to still participate at the Bonneville speed trials next fall, but with the goal to attain and hold a constant speed of 200 mph down the salt flats.

We will keep you posted with more details and photos of the G-force-One.