WHEN HIBBERT WINS WITH APV OIL, YOU WIN! 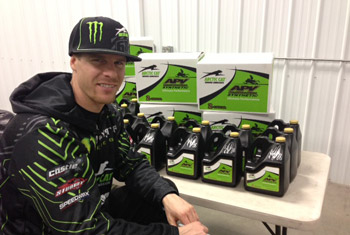 Tucker Hibbert has won more snocross races than any other active racer and is currently a handful of wins away from becoming the winningest snocross racer ever.

Tucker and his team demand the best performance and protection for their championship-winning Arctic Cat snowmobiles, and that’s why they run APV. For the 2013-2014 Snocross race season, APV Oil is proud to continue being the Official Oil Supplier for Hibbert Racing.

Hibbert wants his fans to win with APV just like he does, so every time he takes the checkers this season during a Pro Open Final, eight fans will receive an autographed jug of APV oil. Odds are good too – last season Tucker won over 70-percent of the races he entered while using APV Lubricants.

You only need to enter once to be eligible to win after any of the races on Hibbert’s calendar. Enter for a chance to win when Tucker wins!

Signing up for a chance to win is easy, just log on to arcticcatlubricants.com/win and enter your info.

Arctic Cat Inc., based in Minnesota, designs, engineers, manufactures and markets snowmobiles and all-terrain vehicles (ATVs) / Recreational Off-Highway Vehicles (ROVs) under the Arctic Cat brand name, as well as related parts, garments and accessories. Arctic Cat is among the most widely recognized and respected brands in the snowmobile and ATV/ROV industry. The company markets its products through a network of independent dealers located throughout the United States, Canada and Europe, and through distributors representing dealers in Europe, the Middle East, Asia and other international markets. Arctic Cat trades on the NASDAQ Global Select Market under the symbol ACAT.