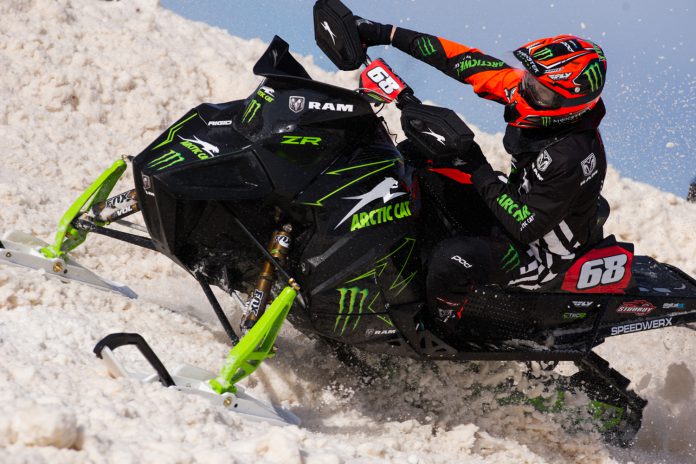 February 13, 2018 – Tucker Hibbert will take on the Eastern Snocross National this weekend in Salamanca, NY. Held a popular gaming and event center next to the Allegany Mountains, it’s the only time this winter Hibbert and the ISOC National Snocross tour will land in the Northeast US.

Hibbert enters this weekend’s event on fire, winning seven of the eight races contested so far this winter. He’s looking to build on his winning momentum as the national series hits the halfway point of its season.

Tucker Hibbert – #68 Monster Energy / Arctic Cat / Ram Truck
Racing at the Eastern National:
“The race in New York is always awesome. It’s our one race in the northeast so the fans are always super excited to come out, cheer us on and watch the races. Over the years, New York has had some of the most wound up fans we’ve seen. It’s always fun to race in front of a crowd with that kind of energy and put on a show for them.”

On track goals and thoughts:
“I’m really excited to get back to racing. We’ve had some time off since the last race, which has been good, but I’m ready to get back to it. This weekend really kicks off the second half of the season and from here on out, it’s going to go quick. We’re in a good position and I feel ready to keep fighting for wins.”