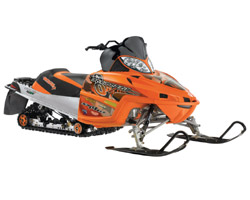 In an age where consumers want a snowmobile that can perform on the trail, just as well as off the trail, the lightweight, agile, Crossfire outshines every other hybrid snowmobile.

For 2007 the Crossfire series has an expanded model line-up, which will continue to further pound the hybrid competition into the ground with bigger displacement motors, suspension packages and standard Push Button ACT Reverse.

Propelling the Crossfire to an even higher class of dominating performance is the new Suzuki lay down EFI engines. For 2007, the Crossfire is available in a 500, 600, 800 and monster bore 1000. Rest assured the legendary horsepower found in these EFI motors will leave the competition standing still on the trail as well as them watching you blaze new trails.

All that new horsepower is put to the ground via a redesigned ACT Drive System with standard Push Button Reverse. The ACT Drive System eliminates the traditional chain case with a planetary gear drive located on the PTO side of the chassis. This weight reduction also places the hydraulic brake disc directly on the drive axle.

In the rear, power is fed to a FasTrack Long Travel System slide-rail suspension with lightweight aluminum Arctic Cat (IFP) shocks and a Torque Sensing Link rear arm, but to answer demand for the hardcore rider, Arctic Cat will have its infamous Sno Pro package available on the 800 and 1000 models. This aggressive rear suspension calibration will eat up any terrain you throw at it.

Both suspension packages are wrapped with a 15 x 136 x 1.25” Ripsaw patterned track designed for the ultimate trail and powder performance.

The Crossfire shares a lot of elements found in the M-Series mountain machines such as a newly redesigned mountain handlebar with updated controls. These bars not only help toss the sled around in the powder with ease, but help the transition from sitting to standing to be virtually effortless.

Supertrax Onlinehttps://www.supertraxmag.com
Check back frequently for new content and follow us on social media!
Previous articleBRP’s Move South of The Border
Next articleF-Sleds Still Dole Out Proper Attitude Adjustment