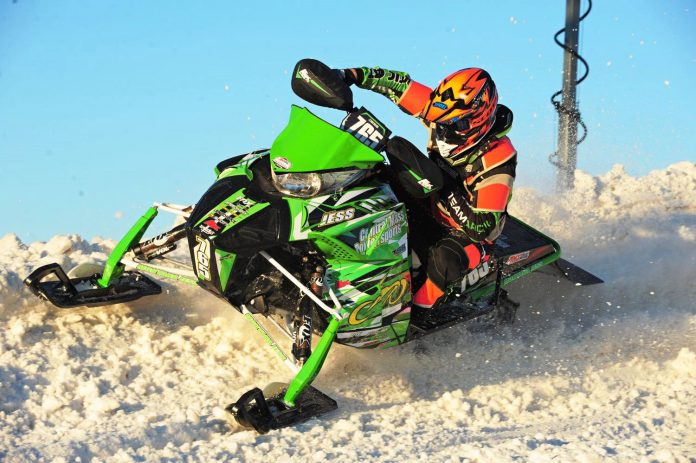 Team Arctic snocross racers launched into the 2015-2016 season and on top of the podium with a stunning performance at the ISOC National at Spirit Mountain in Duluth, Minn., delivering six victories, 21 podium positions and a winning performance across all classes and categories aboard the mighty Arctic Cat ZR6000R SX.

Tucker Hibbert once again led the charge at Duluth with a dominant performance in the Pro Open class, taking the win on night one with his fifth consecutive victory at this venue, followed by a near-miss on the second day that saw him charge from mid-pack to second place, less than a half-second from passing for the win.

If there were questions about Team Arctic’s top Sport riders moving into the Pro Lite class for this season, they answered it with a show of force sure to make the competition nervous. Montana Jess claimed a pair of second place finishes, Dan Benham took a third place, and Team Arctic claimed five of the top-10 in one final and four of the top-10 in the other.

Ryley Bester hit a new level of speed and confidence to start the season, taking commanding wins in both Jr. 14-15 and Jr. 16-17. The winning continued in the youth classes with Eric Downs claiming Jr. 10-13, Inanna Hauger winning Jr. Girls 9-13, and Anson Scheele taking Transition 8-12. When Team Arctic wasn’t winning, they were a whisker away from it. Eddie Neubaur, Dylan Jansen and Brandon Lind delivered podium finishes in the Sport and Sport Lite classes, while Wes Selby made a strong return to snocross with a second in Pro AM 30 Plus.

“We’re happy and excited,” said Team Arctic Race Manager Mike Kloety, when asked about the team’s overall performance at Duluth. “For starters, it’s great to capture the big class with Tucker. That’s the headline win for sure. But it’s equally impressive to win every Junior category, with Team Green taking five of the top-6 in Jr. 16-17, four of the top-5 in Jr. 10-13 and seven of the top-10 in Jr. Girls. Plus we claimed podium positions in every Pro Lite, Sport and Sport Lite class. It proves how hard our racers and teams have worked, the power and handling of our ZR6000R SX race sled and the strength of our program.”

The Arctic Cat brand is among the most widely recognized and respected in the recreational vehicle industry. The company designs, engineers, manufactures and markets all-terrain vehicles (ATVs), side-by-sides and snowmobiles, in addition to related parts, garments and accessories under the Arctic Cat and Motorfist brand names. Arctic Cat Inc.’s world headquarters is located in Minneapolis, Minnesota. Its common stock is traded on the NASDAQ Global Select Market under the ticker symbol ACAT.

More information about Arctic Cat and its products is available at arcticcat.com.