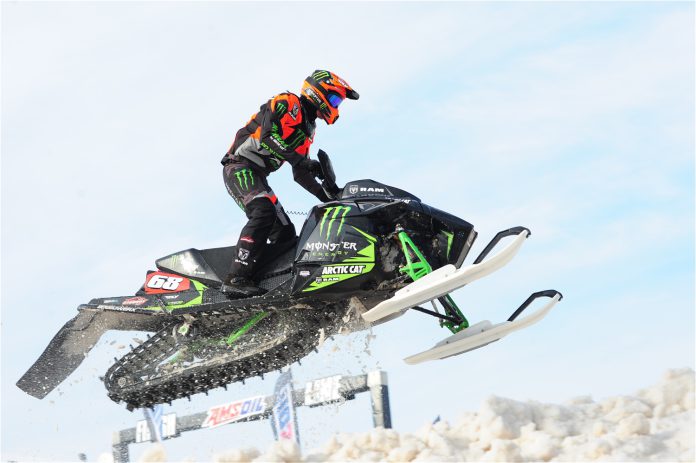 Team Arctic’s Tucker Hibbert made a strong return to his Pro Open title defense with a third place finish in a wild Pro Open final that saw him survive a brief tip-over and a late-race charge that brought him to within touching distance of the podium’s top step. Logan Christian also delivered a strong performance, racing his Speedwerx-tuned Arctic Cat C-TEC2 EFI package to eighth place following an untimely tough start that left him battling forward from 14th position.

Ryley Bester proved to be the top racer of the weekend, capturing wins in Sport and Sport Lite aboard the Arctic Cat ZR 6000R SX, the sport’s first 600-class race sled featuring Electronic Fuel Injection. His Frattalone Racing teammate Eric Downs kept the momentum going with a win in the Jr. 16-17 class. Taven Woodie scored top honors in the Jr. Girls 9-13 class, while Zach Stein took the win in Transition 8-10.

The all-new Arctic Cat SVX 450 made history at the first-ever ISOC National event for snow bikes with a second-place finish at the hands of Wes Selby. The sport’s first purpose-built snow bike, the SVX 450 proved its potential in a class and sport that’s rapidly evolving.

“To come out of Duluth with five wins out of 16 finals and 14 of 48 possible podium finishes speaks volumes about the hard work and talent of our teams as well as the strength and potential of our ZR 6000R SX with the Arctic Cat C-TEC2 EFI engine,” said Mike Kloety, Team Arctic Race Manager. “With very little testing and seat time prior to the event, let alone the conditions they raced in, our sleds and racers did an excellent job.”

He added, “We knew there would be questions about the new EFI engine in competition, especially when it’s the first-ever 600-class EFI engine, and I think we answered them with our success. We made a lot of tuning progress at Duluth, which showed in the numerous holeshots we got in every class. Some things can only be learned on the track, with seat time. We will be even better at the next round.”

The next ISOC National snocross is Dec. 16-17 in Winter Park, Colorado. ”

About Arctic Cat
The Arctic Cat brand is among the most widely recognized and respected in the recreational vehicle industry. The company designs, engineers, manufactures and markets all-terrain vehicles (ATVs), side-by-sides and snowmobiles, in addition to related parts, garments and accessories under the Arctic Cat® and Motorfist® brand names. Arctic Cat Inc.’s world headquarters is located in Minneapolis, Minnesota. Its common stock is traded on the NASDAQ Global Select Market under the ticker symbol “ACAT.” More information about Arctic Cat and its products is available at www.arcticcat.com.

Staff Report
Previous articleWHY DO YOU TRADE IN YOUR SLED?
Next articleNorth American Top Snowmobiler