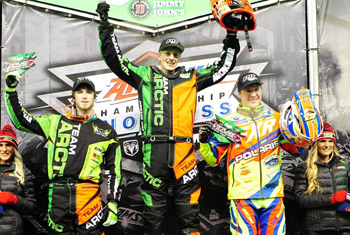 It was a stunning show of force for Team Arctic racers on a cold and wintery January weekend as they dominated the ranks at the ISOC Canterbury snocross in Shakopee, Minn., and the USXC cross-country in Devil’s Lake, ND.

It was nine wins out of 17 classes – including 25 of 51 podium positions – at the Canterbury snocross, while the cross-country corps delivered 16 wins in 20 classes and 40 out of 60 podium positions.

Racing out of the Factory Team Arctic trailer, 17-year-old Dan Benham captured his first win in Pro Lite #2 in his freshman year in the class while current points leader, Montana Jess, finished right behind Dan in 2nd. Eddie Neubaur was another first-time winner, taking the honors in Sport #1.

Ryley Bester once again delivered an outstanding performance, staying perfect for the season in the Jr. 14-15 and Jr. 16-17 classes. Eric Downs took yet another win this season in Jr. 10-13; Taven Woodie captured her third win of the season in Jr. Girls 9-13; and Anson Scheele led a Team Arctic sweep of the Transition 8-12 final.

“This was one of those weekends that we’ll savor for years to come,” said Mike Kloety, Team Arctic Race Manager. “Sweeping all the Pro classes in both venues, plus winning more than half the snocross finals and 80% of the cross-country classes aboard our ZR 6000R and ZR 4000RR snowmobiles proves the talent of our riders, the dedication of their crews and the performance of our snowmobiles. Our entire company is extremely proud of all our racers.”

More information about Arctic Cat and its products is available at arcticcat.com.