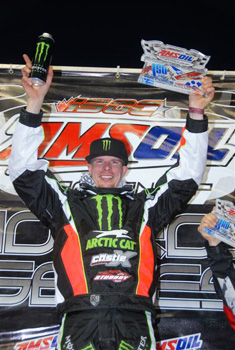 Three races into the ISOC National Tour and the competition is still singing the Boy Scouts blues, thanks to another series of crushing wins by Team Arctic racers and crews.

This time it was at Canterbury Park in Shakopee, Minn., where record spectator attendance witnessed Team Green win both Pro classes, Pro Women and Semi-Pro Open, along with podium finishes in nearly every class.

“Our racers continue to prove their excellence in the highest level of national snocross racing,” said Mike Kloety, Team Arctic Race Manager. “With four wins in the top classes and a point lead in six classes, Canterbury was another hugely successful weekend for our team.”

Joining Hibbert on the podium in the Pro classes were two racers whose stock are going straight up: Garth Kaufman and Brett Turcotte. Kaufman, of Boise, Idaho, threw down a series of blistering laps in the middle of the Pro Stock final to finish second and his first podium of the season. Turcotte (Clearwater, British Columbia) was equally impressive in Pro Open, turning his first podium-placing of the season with a strong second.

Dan Ebert continued his remarkable season in Semi Pro by winning the Open class and finishing second in Semi Pro Super Stock at Canterbury. After missing the opening round in Duluth due to a hand injury, Ebert (Lake Shore, Minn.) has won a class at each National as well as notching top finishes in USCC cross-country races on “off” weekends.

While there was much to celebrate at the Canterbury National, injuries took their toll on two Team Arctic racers. Swedish star Christian Salemark was impacted by another racer on the first lap of the Semi Pro Super Stock final, which effectively took him out of that and the Open class final. His bruises should heal quickly, and he’ll likely return for the next National to defend his Open class point lead.

Logan Christian faces a longer road to recovery, following a last lap crash and subsequent impact from another racer that resulted in a broken collar bone, ribs and internal bleeding.

“Logan suffered a nasty incident, but he’s going to be okay and hopefully return by the end of the season,” said Kloety. “The Christian Bros. Racing team had a real roller-coaster weekend, with excellent finishes by Davis, Turcotte and Kaufman tempered by Logan’s injuries.”

About Arctic Cat – Arctic Cat Inc., based in Thief River Falls, Minn., designs, engineers, manufactures and markets all-terrain vehicles (ATVs) and snowmobiles under the Arctic Cat® brand name, as well as related parts, garments and accessories. Its common stock is traded on the Nasdaq National Market under the ticker symbol “ACAT.” More information about Arctic Cat and its products is available on the Internet at www.arcticcat.com

Supertrax Onlinehttps://www.supertraxmag.com
Check back frequently for new content and follow us on social media!
Previous articleSPOT Assist Satellite-Based Roadside GPS
Next articlePolaris Push Toward ISOC Titles in Second Half