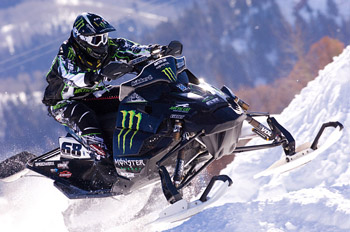 Fifth Gold in a Row for Hibbert; Silver Medal for Jeff Tweet

It was Hibbert’s fifth consecutive gold medal and his 10th medal in 12 years. His teammate and mechanic Jeff Tweet was equally impressive, finishing with a silver medal in the Adaptive Snocross final.

The only drama happened on the first lap of the final, when one competitor jumped the start and another partially landed on Hibbert before veering off the track.

Hibbert shrugged off both incidents, took the lead threw down a series of fast laps before cruising to an unchallenged win. The victory moved Hibbert past Blair Morgan on the all-time win list.

“This win feels amazing. Every win is special but this one means a lot to me. Beating Blair’s record for most snocross gold medals is really exciting, but I have to thank him for setting the bar high. He helped make me the competitor I am today and I really wish we were still battling on the track.”

Jeff Tweet’s silver-medal in Adaptive Snocross was sweet retribution after breaking his leg in last year’s Adaptive race. Tweet double-jumped his way through the final technical section of the course to pass into second-place, and his first X Games medal.

About Arctic Cat – Arctic Cat Inc., based in Thief River Falls, Minn., designs, engineers, manufactures and markets all-terrain vehicles (ATVs) and snowmobiles under the Arctic Cat brand name, as well as related parts, garments and accessories. Its common stock is traded on the NASDAQ National Market under the ticker symbol ‘ACAT.’ More information about Arctic Cat and its products is available on the Internet at www.arcticcat.com.